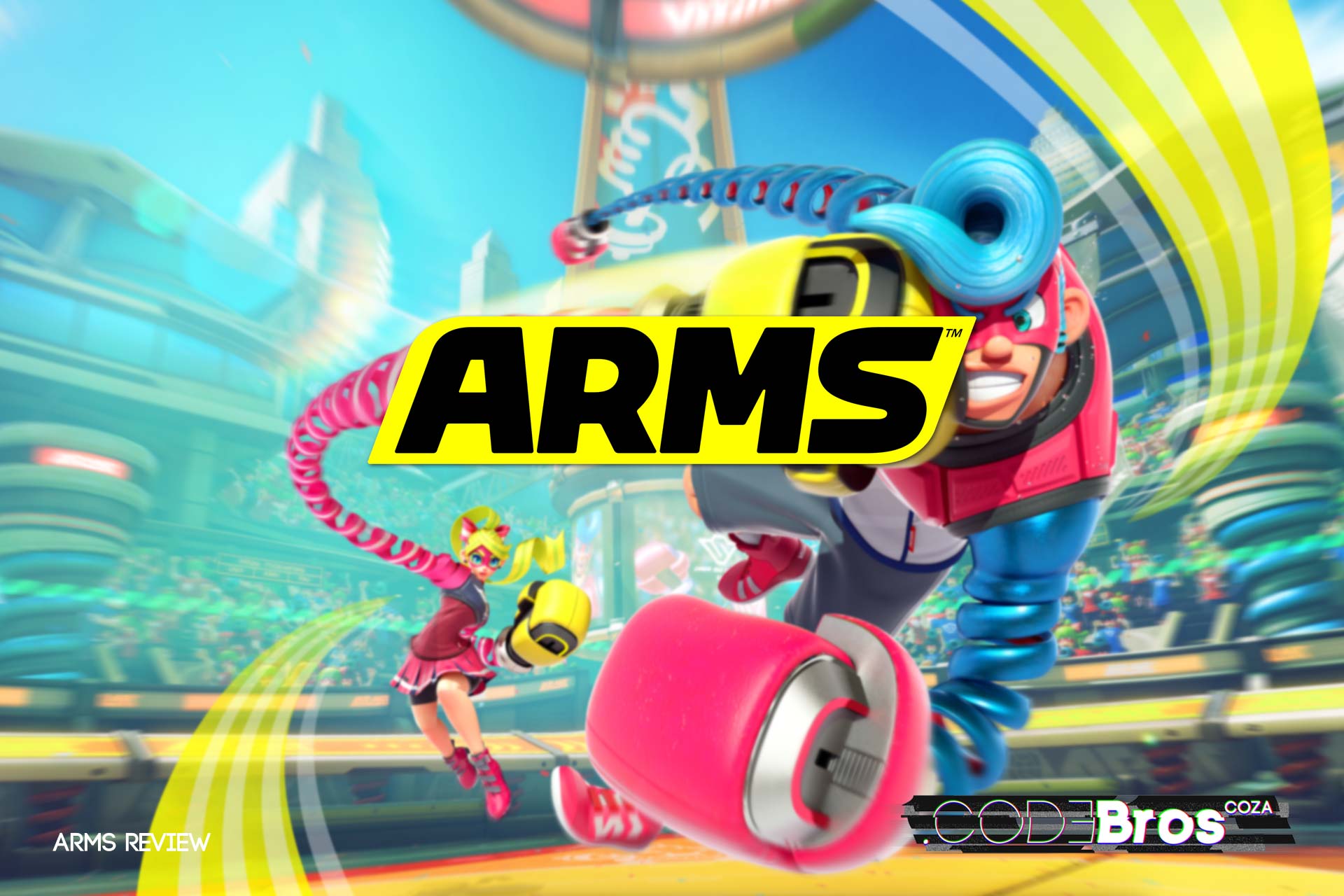 Make way for Nintendo’s Fighter… and I mean “make way”! You might just find yourself receiving not only a digital right hook to the jaw, but in real life too.

What would be the best way to utilize your arms if they were stretchy like Mister Fantastic? Reach for that Vanilla Coke in the fridge while relaxing on the couch? Change the channel on your TV if you can’t find the remote without getting up (remotes go missing guys…seriously)? Well, in the wonderful make-believe world of Nintendo, using your arms as weapons in a sport by punching the daylights out of your opponent is the best use of such special gifts!

Put aside the “logic” and just “go with it”. There are so many games that offer a near-reality experience, and life is so serious already, that we all just need to get away from it all and bounce around the lounge throwing elastic-like punches at our screens (that was my attempt at creating another saying like “Dance as if nobody is watching”). That being said, basically, not everything needs to make sense. Enter Arms and the Cast, or in this case the Unique Characters.

Each Fighter has their own unique style of “Arms” and in the one “celeb fighter’s” case, she uses her hair as her weapons (Twintelle). There is no deep back-story to each fighter, or explanation as to how they got their abilities or how they came to join the Arms Gran Prix, but again, this game does not look like it is about the “how” but more about the “why”. You can choose to play this through a Solo “Campaign”, or both Online and Offline Multiplayer, which really does make it an all-round-accessible “fairy tail” fighter.

There are 11 Different Fighters, ranked in three categories, S-Tier (Best), A-Tier (Average) and F-Tier (Weaker). How you use their specific specialties though, can be a game changer and show you that the “underdog” can in-fact beat the crowd favorite. It will not take you long at all to find a character and play style that suits you, but there is a lot to take into consideration. As an example when using a lighter character who can easily jump (Ribbon Girl can Double Jump) out of harm’s way, you need to remember that she can also be knocked off her feet easily with a single punch. Weapon Options come in the form of the Arm-Attachments, where each character starts with three to choose from before each match, you can also use the currency you earn in game to unlock more options. “Fine-Tuning” is represented in which attachment you add to each of your Arms, and while my OCD often forced me to have the same weapon on each arm, I lacked the diversity in fights, so I recommend Switching (see what I did there?) them up.

How Do I Tame Them?

You play Arms with a Joy-Con in each hand (wrist straps are a requirement) in a “Thumbs-Up Grip” (vertical Joy-Con, buttons inwards, thumbs on triggers). There is a very quick Tutorial to run you through the basic art of fighting the Arms way. To move, you simply tilt both Joy-Con Controllers in the same direction. To Block, tilt both Joy-Con Controllers towards each other. Press specific buttons with your thumbs to Dash, Jump or release your Charged Attack. To Punch, well punch your arms. To Grab, punch both Joy-Con Controllers forward at the same time and your character will grab their opponent and throw them to the ground (and this is why I said make room in the intro of this review). To Guide Punches, Tilt your Joy-Con Controllers, use the Analogue Stick or D-Pad to steer punches after you’ve punched, this is a fancy way of trying to confuse your human (Multiplayer) opponents but can also be to your advantage in your Gran Prix Career Mode (Single Player).

Like most fighting games, luckily here there are no complicated combos to worry about or memorize! Arms can very loosely be classified as a modern “Rock-Paper-Scissors” game, where you need to decide quickly and act on that decision faster than your opponent can, in terms of either punching or blocking before they do. In most of the Arenas the key to winning or dodging massive incoming attacks is moving around. To me it made more sense to jump and dash to avoid punches and use that opportunity to launch my counter offensive before the opponent’s Arms returned to them.

Some Arms are heavy enough to break through incoming punches, some attachments shoot many projectiles horizontally or vertically, and others approach in an swirly motion to attack a defensive opponent from the side. Holding down the dash or jump button will charge a fighter’s weapon (Arms) so that when they’re released the attack has an elemental effect, like freezing your opponent temporarily in place!

The Single Player Mode encourages experimentation with the different characters, their Arms and attachments. There is no story-line in Single Player Mode sadly, but as the first fighting game for Nintendo and the Nintendo Switch Console, there really does not need to be, because the focus is on fun, imagination, the hardware capabilities of the Joy-Con Controllers and the 10 Stage Grand Prix. Basically, like with Mario Kart 8 Deluxe, you choose a character, choose a difficulty level between one and seven, and if you beat all 10 stages that character wins a crown on that difficulty level (lower difficulty levels are automatically filled in). Most stages will be regular fights, with an occasional round of “V-Ball” (Volleyball with an Explosive Ball) or “Hoops” (Basketball where you Grab and Slam-Dunk your Opponent).

In Multiplayer, you can play through an entire Grand Prix with a friend, teaming up against two AI opponents. Team mates are joined together with a spring, which just adds to the chaos that is already engraved in your mind from Single Player Mode, because that spring that connects you, is a blessing as well as a curse! If you are grabbed and thrown, your team mate will suffer the consequences of you not blocking in time as well, but if you block in time, your team mate can unleash all of hell’s armory on that opponent without too much stress of it being ineffective.

You can team up with a friend on the same Nintendo Switch Console when playing Online, whether it is against other friends in your own Lobby called “Friends” or against strangers in “Party Match”, where you get placed into a Lobby where different groups of players are matched for different game modes. To unlock Arms’ Ranked Match Mode you need to complete the Grand Prix at Level 4. Here you can fight strangers to boost your Rank, which’s Tiers are very comically named, like Snail, Lollipop, Whirligig and pinwheel.

The Graphics of Arms is what comes to it’s rescue in the score section, as there is a lot going on visually, and yet it is very easy to see what is going on (if that makes sense). The colours, animations, physics and general particle effects are crisp, focused and unique to the Nintendo Switch Console, which we know is not trying to make a statement when it comes to its Graphics Cores or CPU Threads. The Music and Sounds can get monotonous after repetitive play, but that goes with most titles that have a single focus, and as annoying as it can get, it is not a deal breaker, because when playing, the room is filled more with Grunts, Shouts and Maniacal Laughter instead of the Arms OST and SFX.

Developed and Published by Nintendo, Arms was released globally on 16 June 2017, exclusively for the Nintendo Switch Console. At the time of this review, you could pick up a physical copy from BT Games for R815.00 or a digital version from the Nintendo Store at a low price of R669.00, but be prepared to download 2.4GB for a digital copy. Despite the 13 V recommended Age Restriction, both me and my two sons had a blast of a time playing while doing this review, my youngest often still asks, “Daddy, let’s play some more mummy-man-punching game!” which shows that the Bright Colors, Anime-Styled Characters and Cartoonized-Violence can appeal to any age.