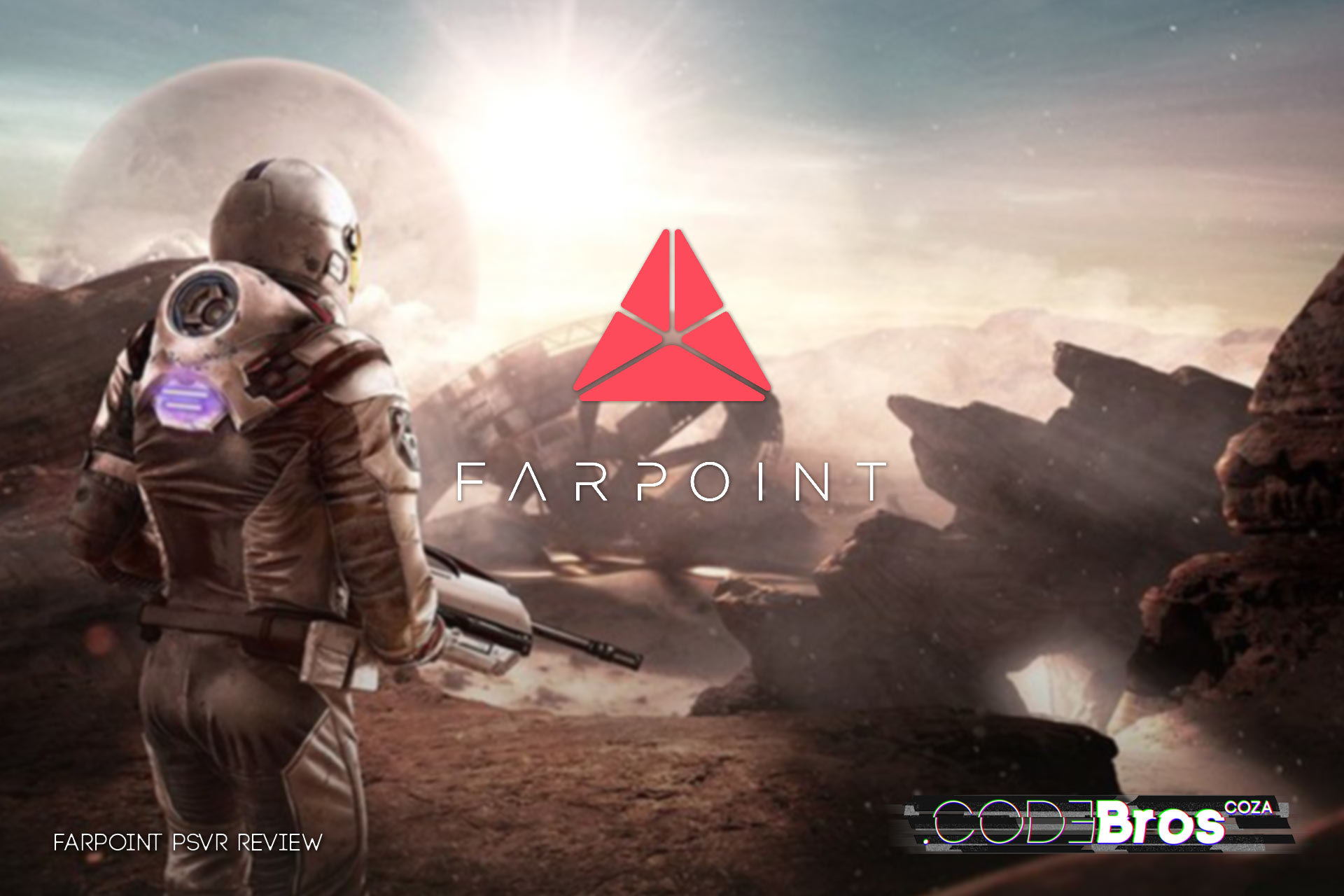 With the global explosion of the PSVR Headset and the few FPS Games being PSVR Compatible, like Resident Evil 7, Farpoint, a fully VR FPS title, has been on my personal watch list since I got my VR Headset in February this year.

First off, let me say, I know this review is a little late on the bandwagon trail, but before you get your pimp-hand ready to slap me, let me state that it is late for the right reasons. If I did this sooner, the review content would have had a different tone. I received my Download Code for Farpoint on the 18th of May 2017, a day after the European Launch. I was ready to play on the 19th of May, but quickly put the controller down as the game started, booted up my PC and clicked on over to loot.co.za and ordered me a #PSVR Aim Controller.

I was so blown away with the start of the game, I had to experience it at its fullest potential. Naturally I had to wait for the shipping. Finally, the following Thursday evening (25 May 2017) I unwrapped my package, plugged the Aim Controller in and busted out the PSVR Headset again and restarted Farpoint. Enter the official Review.

Farpoint runs on the Unreal Engine (which says a lot already), and at the time of writing this review, is the longest PlayStation VR FPS title available on the market. The game opens up with you meeting a couple of scientists onboard a Space Station called The Pilgrim, namely Dr. Eva Tyson and Dr. Grant Moon, who are busy studying an Anomaly in Orbit of a Planet, which seems to be some sort of Self Sustaining Energy Source. The scene then changes to your character, who is only known throughout the entire game as “The Pilot”, due to the fact that you are indeed a Pilot, that is sent to fetch the two scientists and take them closer to the Anomaly. During a docking malfunction, the Space Anomaly implodes, turning into a Wormhole which sucks in The Pilgrim, as well as your Shuttle and spits you out hurdling you towards “Who-Knows-Where”, but from what you can see, while The Pilgrim is being torn to pieces by the atmosphere around you, it is evident that you are about to crash onto an “Alien” Planet.

Once “safely” on the surface, you find yourself stranded between the rubble of what used to be The Pilgrim. You grab your Assault Rifle from inside your Escape Pod and set out to look for survivors, while walking blind in a Desert Sandstorm. You come across a “Holographic Transmitter” that plays back an Audio Data Segment of a conversation that took place between Dr. Moon and Dr. Tyson a few minutes ago (or at least, so we think). Knowing that they survived the crash, you push further into the unknown, through densely detailed caves, open landscapes and rocky or mountainous terrains, while searching for more residual Holographic Fragments that you “Scan” to activate an animated sub-cinematic sequence that shows you what Dr. Moon and Dr. Tyson did when they came through the same area you just entered. This pieces the story together and motivates you to explore as much as you can to see what happened next by finding more “Fragments”.

It does not take long before you are Attacked by your first wave of creepy bugs that resemble and move like Face Huggers that had intimate relations with Head Crabs. Thankfully you “knew” it was coming, by going through a quick instructional on Reloading, Gathering Ammo and Weapon Dynamics. These little buggers are quick and annoying to deal with, but are also, soon accompanied with larger bugs called Goobers, who shoot large sacks of Acidic Goop at you. This is how I unlocked one of my favorite Achievements, because I loved using the airborne sacks as target practice, so once I had shot 50 of them out of the air, I got an Achievement aptly named, “Target Practice“. The bugs just keep getting bigger, tougher and nastier as you progress, and come in increasingly intense waves, so save your Grenades and Missiles for those heavy clusters of Mini-Spider bugs and Thick Armored Gogga’s!

About an hour into the game, I came across a cavern, obviously filled with bugs, but also filled with nerve curdling shrieks, which set me off in an adrenaline filled “self-preservation” rage, because I knew what was coming, it was a Big Bad Bug Boss, the one from the Gameplay Trailers. The one the Size of a Frikken Football Field, with Teeth the size of Trucks!

After the Two Phase Boss Fight, your Space-Suit notifies you that it has compiled enough data from the collected Fragments to play you a Data Entry into the Personal Log of Dr. Moon and Dr. Tyson. Now you get a chance to put down your Rifle, and watch an Interactive Cinematic that builds onto the Story some more. Dr. Tyson has left the safety of their “Temporary Shelter” within on of The Pilgrims Habitat’s in search of other Survivors, who they both assume and hope are located at the Main Dome of the Pilgrim’s Wreckage. This sets Dr. Tyson on a few days’ walk, and it does not really look like she encountered as many bugs as we have, because in all her Fragments, she is as cool as a cucumber. Either that or I was just a nervous wreck for being the only piece of red clothing in a field filled with bulls. It sucked being a bug beacon… however…

I started my second sitting of Farpoint about a Kilometer away from the Boss’ Carcass, you encounter some strange Dragonfly Type Technological Drone thingies, known as Scavengers. A little further, you see the bugs being shot to oblivion by a swarm of Scavengers, which then fills in the gaps for you, as you realize that there is a “natural” war going on already on the planet, which you can more than likely use to your advantage! Eventually it is nightfall and you are knee deep in Pilgrim Rubble, surrounded by Scavengers, only to discover that bugs and drones are not your only “companions” but that the Technological Terrors also come in Plus Size! As you dash for cover from a very moody bunch of Scavengers, you run straight into a Towering Giant Mech, that shoots volleys of bullets at you, launches clusters of rockets into the air for you to dodge and sneezes a massive lava beam at your face if you are out in the open for a split second too long. Well, this my dear friends is where I learnt why the characters in the game kept saying, “Survivors Keep Moving!”, because I felt like a Hyperactive Child running to find cover, while stocking up on Ammo. While fighting flying drones. While fighting annoying bugs. While trying to destroy massive robots. While not dying!

I must say that there is a fair selection of Weapons at your disposal to take on these challenges though. You can choose between a Main Weapon and a Secondary Weapon, which you swap out by waving the Aim Controller up and over your right shoulder. The available weapons are: The Assault Rifle; a Shotgun; a Precision Rifle (Sniper); a Plasma Rifle and lastly a Spike Gun. At the start of my third and final sitting of Farpoint (Last Night – See Video Below), I learnt that there was indeed “Intelligent Life” on the Planet, and that I now had Three Types of Enemies to fight against.

The Grunts had a more challenging AI (They Shot Back!) when compared to the AI of the Bugs and Robots, but also felt dumb like the Sentinels in Halo, they even made very similar noises and clumped together in little convenient groups for me to lob a grenade at. The story took an interesting turn at this point in the game, as you get introduced to a new character, that if you were following the story, you would recognize. The science is explained and you get exposed to a revelation about how long you have been on the planet vs. how long the scientists and The Pilgrim have been there.

The Solo Campaign is not the only offering here, as there is a Challenge Mode which you can play, where you face off against Multiple Waves of enemies while running a “Time Trial” through one of the game’s Main Mission Levels. This is a really fun mode, which also employs damage multipliers, measures your reaction speed, accuracy and gives you a breakdown of how many enemies of each kind you managed to take down before either dying or completing the challenge. Here, your score is tallied and posted on a leaderboard that is shared between you and your friends that have Farpoint and rank you globally. Lastly there is a Co-Operative Mode which is very similar to the Challenge Mode, but you have a buddy to watch your back. This mode also employs the benefits of Challenge Mode with Scoring and Ranking.

Farpoint was Developed by Impulse Gear and Published by Sony Interactive Entertainment exclusively for the PlayStation VR Gaming System. Whether we might see a “port” over to other VR Systems, is not clear, so if you are keen to play this, I hope you own a PlayStation and the PSVR Headset. Farpoint can be played without the VR Aim Controller, and is still enjoyable and a lot less taxing on your back and arms, however, I am thankful that I experienced Farpoint with my VR Rifle! The graphics are insanely detailed, and the textures are mind blowing on objects like the rocks, blankets and the weapons. The score and sound effects are predictably heroic or horrific, lending to your overall immersion once you enter the Virtual World of Farpoint. Everything meshes so well, load times are great. Respawn times are quick. I only experienced one glitch, which made it frustrating to clear endgame sooner, but it did not detract from my overall experience.

At the time of writing this review, BT Games has Farpoint for the PlayStation 4 VR System available in stock at R825.00. This is a very reasonable price considering what you are getting, but if you want the Aim Controller as well,
you can get the Farpoint Bundle from loot.co.za for R1,299.00. I do not care much for what has been said by the band wagon leads, because I thoroughly enjoyed Farpoint, it took me about 4 hours to complete if you average out my dying and replay time frame as well as my time spent mucking about with my shadow on cavern walls to test the responsiveness of the Aim Controller. Is Farpoint worth your time and your money? Yes! I believe that Farpoint is the starting point for the future of VR FPS titles. Mark my words.

The Final Hour of Farpoint by CodeBros