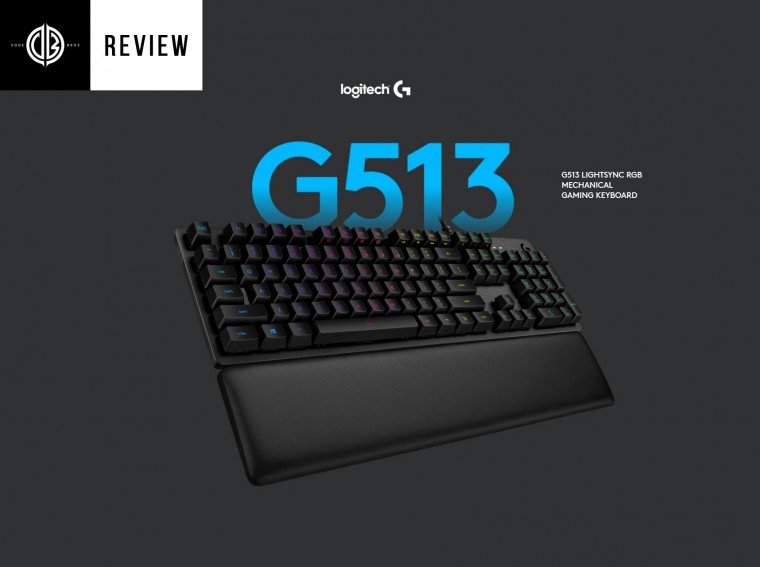 In a market and industry that is completely saturated with Professional Gaming Peripherals, it is exceptionally easy to “get lost in all the noise” and feel helpless when facing the moment of truth; that moment where you drop your hard earned cash on a Keyboard, Mouse or Headset that is supposed to give you the edge, but you do not totally understand all the fancy terms used on the packages, that all seem to promise you the same thing, but quite frankly, don’t.

Logitech has always been a brand that has been underestimated, due to their humble attitude in the past, which gained them a loyal and longstanding fan base, but now, Logitech G, is taking things to the #NextLevel and getting more and more aggressive with their product offering and gaining market share exponentially, respectfully. Hence, we take a look at the brand new Logitech G G513 Carbon Mechanical Keyboard and clearly see how and why the brand is overtaking their competition, with a balanced opportunity for Gamers of all walks of life.

It has been a really long time since I have been able to honestly tell the difference between Tactile and Linear Keystrokes, because there are so many brands that promise you a specific experience, yet fail to “seal the deal”. When Logitech G released the G513, which is the updated version of the G413, they bolted on some major upgrades, which we will discuss shortly, but whilst talking about keystrokes, it is important to mention that the G513 now has Logitech’s “Romer-G Linear” Mechanical Switch to compliment the already existing “Romer-G Switch”, which has been rebranded as the “Romer-G Tactile” Mechanical Switch, as well as the GX Blue (also known as GL Clicky) Keystroke Option. Yes, ladies and gentlemen, you can choose from Three Distinctly Different Mechanical Switches on the Logitech G G513 Carbon Keyboard.

For those of you that, as mentioned in the intro, are not very savvy when it comes to the fancy terminology used in the advanced peripheral feature realm, the difference between Mechanical Keystroke Inputs, specifically in the case of the G513, can be explained as follows, and can be applied to all Mechanical Keyboards going forward. Linear Input, is a very smooth Keystroke (or Key Press) that usually increases in resistance as you reach the end of the key press. Tactile Input, has a very discernible bump that you can feel in the key press before it “bottoms out” (touches the bottom of the keyboard) and has a moderate amount of key resistance when pressing down on a key, and lastly the GX Blue Input (Logitech G 513), has a very distinct audible click when pressed, along with a moderate amount of resistance when pushing down on a key before reaching the “Actuation Distance”.

The market equivalent of the GX Switch is often referred to or known as an MX Switch. The Resistance on a key is termed as “Tactile Force” and is measured in Force or Pressure units known as “gf”, and lastly, Actuation Distance is the point at which the keyboard registers which key has been pressed, triggering the input response to your Game or Program, and as per common perception, is not always once a key bottoms out, but is variable according to which input switch you use. Yes, it is a lot to take in for a newbie, but think of it as a pressure point on your body where you are the most ticklish and the least ticklish; where Contact (Bottoming Out) causes you to Flinch or React (Actuate). So basically, if you are ticklish, you do not necessarily always need to be tickled hard to respond.

What is the big deal with even needing different input switches? Typically, when comparing to the gaming industry, Linear Switches are ideal for MMO or Racing Games and Tactile Switches are ideal for Competitive or FPS Games. With the very technical details now explained, everyone should now be able to understand and fully appreciate the pure bliss that the G513 creates, by giving you the freedom of choice, to suit your Play Style. Essentially, to gain the upper hand in most games, you need your Tools (Peripherals) to respond the way you do, so that there is a symbiotic relationship allowing you to perform at your peak. I mentioned tools, because there is a statement that goes, “A gardener is only as good as the tools that he uses”, and the same principle applies in gaming, if your input devices are slow to actuate, then your response rate within a game will be drastically effected, which means you will always be playing at a disadvantage or a handicap.

Moving onto the rest of the feature upgrades, we will look at the introduction of the RGB Lighting, the detached Leatherette Wrist Rest, USB Passthrough and the Programmable F-Keys. The Logitech G G513 Backlit RGB LED’s can be customized individually with the Logitech G LightSync Technology, which consists of approximately 16.8 Million Colors. Through the use of the Logitech G Hub Software, not only can you create your own custom color animations or choose from a selection of preset effects to satisfy your RGB experience, but you can allow the lighting to be driven by Games, Audio or even your Screen. Meaning that through the advancement of this technology, it now allows your peripherals to not only reflect what is happening in a game, but to also respond to the music you are listening to or change tone based on what you are doing on your screen, where the software matches the theme or color pallet and replicates it through your input devices.

Most gaming keyboards come with a wrist rest or wrist guard “built in” or “attachable” to the keyboard, but the G513 has a Detached Wrist Rest that is soft, strong and made out of memory foam that quickly recovers from resting pressure which is covered by a very durable leatherette material, making it not only waterproof but also sweat-resistant that is easy to keep clean. What makes this such an attractive feature is that you can place the wrist rest anywhere near the keyboard if you do not want to align it perfectly, and the six bottom-mounted rubber feet attached to the wrist rest will keep it firmly in place, allowing you to Game, Design or Code at any angle without worrying about your comfort slipping away from under your wrists. If you are smart, you could even position it in such a way where it can be used for both your left and right wrists simultaneously (keyboard and mouse) for ultimate comfort.

Next on the list is the USB Passthrough Port, located on the top right of the G513, which is linked to your system through a dedicated USB cable allowing you to add any USB devices conveniently where they will still gain full power throughput and data speed, meaning that you can either charge your phone as an example or plug in other peripherals or data devices without needing to worry about touching the main USB connection points on your standalone rig or laptop. Lastly, with this being a purely gaming focused keyboard, Logitech G have not included dedicated Macro or Media Keys, sacrificing those to offer a very sleek and tidy presentation instead. Not all is lost though, so please, do read further.

Although there is not a dedicated section on the G513 for them, there are Media, Macro and Lighting Controls available through the use of FN Key (Function Key) Shortcuts to control the Volume, Play and Pause or Mute your Media. You can also activate Game Mode so you do not unintentionally switch applications while in a game and also change Lighting Effects on the fly by configuring your FN Key Shortcuts via Logitech G Hub. Typically this would double up your F Keys, like on a laptop, where by pressing the FN Key and F8 together you can turn on Game Mode, or by pressing the FN Key and F9 though F12 you control your Media.

Honestly, at first, the dual USB cable that connected to my system was something I had to get used to, mainly because of me having the mindset of USB Hubs being able to handle multiple devices over a single cable, but this faded with time as I came to accept that a dedicated cable will guarantee device stability and constant power throughput, especially when dealing with External Hard Drives. It still did not make up for my fake dismay of “losing” a USB Port on my system. I have seen some other keyboards with a USB Passthrough Port, but where it was positioned on either the bottom or sides of said keyboard, begging to frustrate their user, so with this being my first experience at using a keyboard with an active USB Slot on it, I am pleased to state that I was not disappointed in any way. With everything fitting so snug on the keyboard, the dimensions of the G513 measures at 132mm in Length, 445mm in Width and is 35mm High, also Weighing in at 960g without it’s braided dual USB cable, which is 1,8 meters in Length.

When it comes to the Design and Ergonomics of the Logitech G G513 Carbon Mechanical Keyboard, I found that the housing of the keyboard was made out of a very durable Brushed 5052 Aluminum-Magnesium Alloy which which not only allows for both a Minimalistic Design and a Beautiful Aesthetic, but it also guaranteed you a Rigid device that would withstand the test of time. With an impressive keystroke rating of 70 Million presses, it does not take much to recognize the boldness that Logitech G has attached to their range. Inside your box, Logitech G have also included 12 specially contoured ABS Key Caps that have been carefully laser molded so you can replace Critical Gaming Keys to fit your favorite Game by quickly and easily swapping them out with the included Key Puller. Other items contained in the box are the G513 Gaming Keyboard, the Memory Foam Wrist Rest and User Documentation.