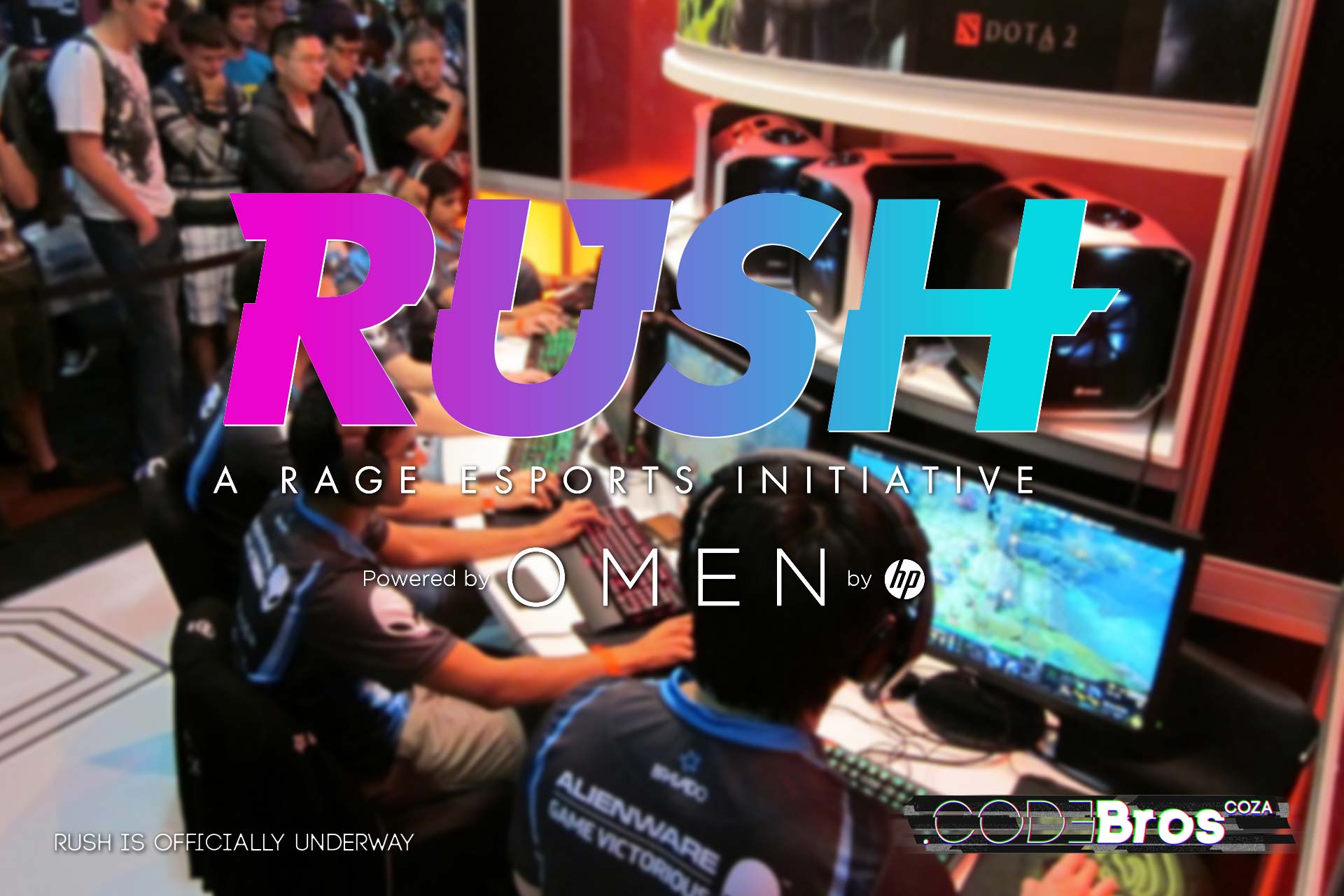 Get Your Winter Weekend Rush… at Rush!

Want to learn more about esports, meet and talk to pro players, watch SA’s top teams compete, and maybe even enter a competition yourself and win some prizes? Then Rush is where you want to be this weekend.

Designed by the creators of the legendary rAge (really Awesome gaming expo), the inaugural Rush event, powered by HP OMEN, is a first for esports in South Africa and is set to become an annual showcase of all things esports.

Taking place between 21 and 23 July at the Sandton Convention Centre in Johannesburg, Rush will feature a variety of competitive esports tournaments hosted by leading local organisations across dedicated esports stages, with live shoutcasting (commentary) by some of South Africa’s top shoutcasters. South Africa’s best competitive gamers and clans will compete for the honour of taking home the glory, as well as for a host of incredible prizes.

Four main stages will be showcasing popular titles such as Counter-Strike: Global Offensive (CS:GO), FIFA 17, League of Legends, and Street Fighter V. Fans, supporters and enthusiasts will be able to watch all the competitions live on big screens, with dedicated seating areas at all the stages. In addition, visitors will also be able to sign to enter exciting tournaments across a range of games like Hearthstone, FIFA 17, Street Fighter V and Metal Slug. There are some awesome prizes up for grabs, so anyone with even a passing interest in video games is encouraged to come and take part.

[miptheme_quote author=”said Lauren Das Neves, marketing manager for Rush, NAG and rAge.” style=”text-center”]Rush is an exciting, compelling showcase of everything that South African esports currently has to offer. We’ve created a unique experience that will appeal to both casual and hardcore gamers, and one that will serve as a visual introduction to anyone who doesn’t know what all this esports fuss is about. Having been actively involved in the local gaming industry for the past 20 years through NAG and rAge, Rush is a great platform for us to build, empower and connect with new and existing esports communities. [/miptheme_quote]

Big news for Kaizer Chiefs supporters is that they’ve announced their participation at Rush. The club has partnered with sponsors Vodacom and Nike for the event, giving gamers a chance to battle it out at the Kaizer Chiefs esports stage. Gamers will go head-to-head in the FIFA 17 tournament in a bid to be the ultimate winner. To enter the Kaizer Chiefs tournament at Rush, visit www.acgl.co.za/kaizerchiefs to sign up. Entry to the tournament is free.

For Warcraft and Hearthstone fans, Kwesé will be hosting a Hearthstone Fireside Gathering at Rush. There is R30,000 cash in prizes for winners across the weekend, with the player in the daily top spot walking away with R5,000. Second and third place get R3,000 and R2,000 respectively. There’s also a gaming notebook from MSI up for grabs, so all you need to do is shuffle those decks. In addition, there’s a casual tournament for those keen for some arrive-and-play fun.

Other activities include PlayStation VR, arcade cabinets and retail stands, so there’ll be plenty to do while you’re taking a break from all the esports action!
If you’re a fan of old-school, arcade-style gaming, then be sure to visit the NAG Arcade / Eurasian Entertainment stand. Try your hand at Metal Slug, set a high score, and the player with the highest score at the end of the weekend will win an arcade machine that oozes retro coolness.

Matrix Warehouse will be running a fastest-lap challenge on their stand with mystery prizes up for grabs each day.
Orena is ramping up its Fight Night offering at Rush, with the casual Street Fighter V tournament set for an EFC-sized boost. EFC Worldwide welterweight champion Dricus du Plessis and bantamweight champion Demarte Pena will battle it out in an exhibition match in the OFN octagon at 11:00 on Sunday 23 July, with other EFC athletes waiting in the wings to challenge them. You won’t want to miss this epic battle! Gamers can enter the Orena Fight Night challenge and stand to win R20,000 at the end of the season.

Orena is also offering the chance to qualify for ESWC for CS:GO on one of the main stages. “The country’s best esports teams will be fighting it out in a world-class arena, for the opportunity to take on some of the best players on the planet,” says Luca Tucconi, Operating Executive at Orena. “The competition is fierce and the prize is massive – and we have one or two surprises up our sleeves for the winners”.

Alongside this high-adrenaline and hugely entertaining line-up, one of the other exciting features of Rush is South Africa’s first Winter NAG LAN – an opportunity to experience multiplayer gaming with hundreds of likeminded gaming enthusiasts packed into a single venue. A NAG LAN ticket also gives you access to the Rush event for the full weekend. Casual competitions for Dota 2 and Rocket League will be hosted in the NAG LAN, with hardware peripheral prizes up for grabs, kindly sponsored by Apex Interactive. A formal competition for Call of Duty: Infinite Warfare will also be hosted in the NAG LAN for 16 teams on PS4 in the NAG LAN with a total of R19,000 in prizes to be won.

About Rush
Rush is a rAge esports Initiative, formed by NAG and rAge in 2016 to help build and nurture the emergent esports community in South Africa and beyond. Our mission is to expand the growing esports fan base as well as the local esports community by promoting esports tournaments, competitions and events to hardcore and casual audiences, as well as by bringing a level of professionalism to local events we host or are associated with. The goal of this initiative is to significantly accelerate the development of the South African esports industry as a whole. In 2016 we launched and hosted Africa’s first Esports Branding Summit at last year’s rAge Expo in Johannesburg, in partnership with GAMeS (Global Assembly Marketing eSports).
#rushesports2017

About HP OMEN
The HP OMEN unified gaming portfolio, launched in 2016, delivers over-engineered products meant to bring bold innovation in the gaming space. HP OMEN has reinvented gaming, by delivering extreme performance and unprecedented PC customisation for gamers who crave to dominate games. The funky looking OMEN 17 laptops are equipped with the latest CPUs and GPUs for the best gaming and virtual reality experiences.
#DominateTheGame