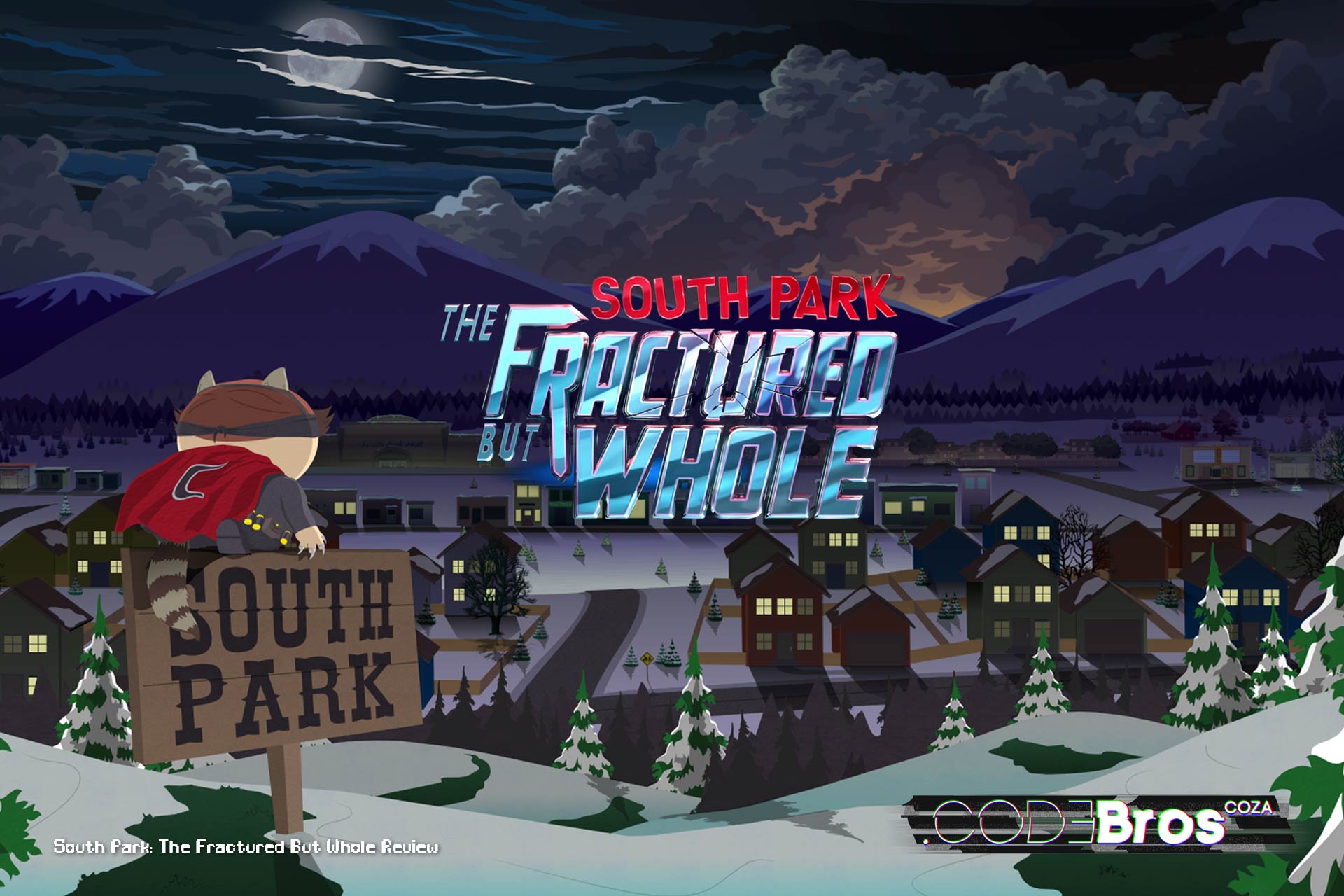 You need to be a very special kind of human to appreciate, stomach or even consider entering the world of South Park. This is a very valid statement regarding the Animated Television Series, let alone willingly Role-Playing the Video Game… and a Sequel at that, none the less!

What may be Taboo to you, may not be Taboo to others, and vice-versa, which is exactly what makes South Park such a compelling “love-to-hate” franchise. Everyone knows about it. Not everyone will admit to loving it. Make no mistake it will offend you. It offended me, countless times, so I will come straight out and say that South Park has never been my “thing”. I have watched a few snippets in passing, or searched for specific episodes that I was interested in, as an example the World of Warcraft Special, but I will not purposefully tune into a channel to watch the latest episode of the Television Series…at least, that was prior to me spending 23 hours in total, glued to my console to play through “The Fractured Butthole”.

South Park: The Fractured But Whole (Fractured Butthole) takes place right after the first South Park Video Game, The Stick of Truth (2014) where Cartman (The Wizard) shifts his attention toward the degrading state of public safety and increase in “petty” crime in South Park, donning a new persona, The Coon and invents a new game called “Superheroes” by “Travelling Back in Time” to prevent the town from falling into Chaos’ Hands (Pun Intended).

South Park: The Fractured But Whole receives the cross-over treatment in the Animated Television Series’ 281st Episode, introducing the world to “Coon and Friends”, followed directly with the new game which wastes no time when it comes to balancing your ethics and comfort zones on a knife edge. Case and Point: Your game difficulty is set according to your skin-tone! The darker your skin-tone, the more difficult the game will be and your victimization standards will scale accordingly. There is even an achievement for completing the game as a Black Person on Mastermind Intensity (Called “The Token Experience”). Is this acceptable to laugh at? Erm… moving along swiftly, something even more notable is the ability to Customize your Gender, which surprisingly, affects how your in-game Interactions will Progress!

Being King, the gameplay kicks off with you sitting on the White Throne (Toilet) dropping a Coiled Cadavre into the Pit of Eternal Wisdom (Yeah, I just made that up!), earning you the title King Douchebag, because you literally use your controller to Curl, Gas Up, Stretch and Finally Cut your Poop with a series of Mini-Game-Like Button Mashes and Joystick Rotations to Complete your Business. You then head downstairs after an awkward encounter with your parents and enter battle while heading to Koopa Keep. The Battle System has been Upgraded with a Multi-Class System, Turn-Based Quadrant Puzzles and also a Character/Team Sequence Timeline to help you plan your battle to either avoid heavy damage or line up your team to inflict serious waves of Decimating DPS.

Your Game Progression is entirely rooted via your Smartphone, introducing Elements (Apps) as you make your way through the Story, such as your Map, Costumes, Crafting, Character Sheets, Allies, Artifacts, Inventory and your new Notification/Social Platform “Coonstagram”. You get introduced to the Crafting System quite early, which gives you the ability to make your own Consumables (Health Boosts, Effect Nullifiers), Artifacts (Special Slot Items granting you Might) and Special Mission Items through Recipes you acquire in Story Missions or Side Quests. As your character gains experience and climbs the Level Ladder (Capped at Lvl 15), you unlock Artifact Slots, which are items granting you Might. Might is your Character’ Strength Meter. The higher your might, the stronger your attacks are and the better your defense is. Certain Story Missions or Battles have a Minimum Might Requirement that you need to meet before progressing.

Your Inventory, as per the norm will help you keep track of your Crafting Ingredients, Mission Items and Currency. The Character Sheet is your Character Profile, which starts off with 6 empty sections which you decide upon and fill in as you play the game by interacting with the School Councillor (Race, Gender and Persuasion), Jesus (Alignment and Religion) and then your Kryptonite and Economic Level are decided after certain situational encounters. The Character Sheet also gives you detailed Intel on your acquired Titles, Allies and their abilities, Summons (like Moses via a Craftable Macaroni Star of David Consumable Battle Item) and your Time Glitching Farts (Four to Unlock through interaction with Morgan Freeman). The Time Glitch Farts are very useful and are also required for progression, allowing you to do things like Reverse or even Freeze Time, with a variety of applications and benefits, then you get the Combat only Summoning Fart, which “Warps In” a Clone of your Character to fight at your side for roughly three turns before expiring.

“Coonstagram” is the equivalent of your Mission Log or Quest Tracker, which feeds you interactions between characters, objectives and progression all the while gaining followers and building reputation for the “Coon and Friends” Franchise. It is pretty fun walking around trying to become an influencer by taking selfies with people (or being told off till you have more followers) and taking selfies at specific places, applying filters and posting them up for situational banter, just like on Instagram (The Jesus selfie arch was hilarious!). Eventually your phone runs out of Selfie and App storage space, which then forces you to go to D Mobile and buy a new contract, which then rewards you with the perks of taking selfies with the store staff as well (Double Score).

The Story, Game and Extra Bits

Without giving away too much, which is actually quite impossible, as there is far too much going on in terms of content to cover it all, so I am bound to miss out on some meaty bits, the basics to get you hooked would be: The Superheroes split into Coon and Friends and Freedom Pals over a poorly planned “Phased Cinematic Universe” including Netflix Series and Crossover Movies, which is blatantly poking fun at the difference between the DC and Marvel (MCU).

With half the Squad under the leadership of Timmy (Professor Timmy – Professor X), you join forces with Coon and Friends after choosing your first Battle Class (Brutalist, Blaster or Speedster) and receiving a tragic/not-so-tragic backstory from Cartman/The Coon. It starts off “innocent” (very loose term) with the focus being on beating the rival superheroes franchise by locating a lost cat called Scrambles and getting a $100 reward cash injection to kick-start the Coon and Friends Franchise, which spirals out of control ridiculously fast, blurring the lines in true South Park style and throws you into situations best kept behind closed doors.

As the Story progresses, the most traction is gained at night when you sneak out and get exposed to the adult-nightlife which is being influenced by a third party plotting to overthrow the Major, which in a very irksome way links the missing Scrambles to a much larger conspiracy. With each night out and subsequent “morning-after”, you unlock more characters and Battle Buddies (Allies), some of whom assist you with puzzles in Missions and Free Roam (I highlighted ass for a reason). Along with the Scrambles Story, you indirectly uncover the powers of your “Amazing Butthole” (one of many titles your peers know you by, along with “Ass-Blaster”, “Butt-Lord”, “Thunderpants” and “Fartypants”).

In Free Roam (between missions), you decide whether you want to tackle side quests, which often reward you with crafting materials and Costume Bits. There are a ridiculous amount of costumes to unlock and customize via the Costume App, many that indirectly reference heroes or characters like WonderWoman, Cyborg, Wolverine or even Hulk but I opted for the UbisoftClub Costume Reward, which only cost me 40 Ubisoft points to unlock the Assassin’s Creed Costume and Hidden Blade Artifact! I played the whole game like this, in preparation for Assassin’s Creed: Origins.

As you push through the game, you eventually get to Multi-Class, and can choose skills or attacks from all the different Battle Classes available, making it easy to find the perfect mesh for your preferred Attack, Support or Defense moves. It goes without saying I majored on Assassin Class and my Ultimate, was Assassination, which made my character hop onto the Major’s Roof, whip out a hidden blade and Assassinate a target in true Leap of Faith fashion. Fanboys will fan yo!

Do not be afraid to spend currency to buy and craft consumables or artifacts, you need them as soon as they are available and I often ended up using multiple revives in a battle, so keep your “Stock on Hand” levels at a 10x Stack Minimum to survive comfortably (#justsaying). As earlier mentioned, the game is Turn Based Combat Centered, and each Character has a Battle Class, so make sure you keep your Combat Roster in check with your ideal Allies, because each time you unlock a new Battle Buddy, they by default replace one of the current Allies on your existing roster. Many skills and effects you deal with in battle, both Offensively and Defensively are Bleeding, Shocking, Burning, Chilling and Sickening Effects, all of which can be countered, again, by use of the appropriate consumables mid-battle.

The Game Graphics are true to the Franchise and are flat, 2D cartoons, with the odd CGI section spliced in here and there, in a blue moon, and as for the Sound Track, Audio and Voice Acting, again it is 100% Animated South Park, 100% of the time. In tone. In humor. In fractured morals. In shameless language filters and subtle “Microaggressions” (You need to play the game to catch that one sorry… oops, I just double punned!).

Developed and Published by Ubisoft, South Park: The Fractured But Whole released on 17 October 2017, kinda-sorta 10 months later than we originally anticipated, which even the developers make fun of in-game. At the DLC Bus Stop, one of the guys standing there waiting says, “This was supposed to have been here in December already”, which one can indirectly translate (unless I’m reading too deeply into it) into Ubisoft acknowledging the delay and are making light of it. Along with the release of The Fractured But Whole, PlayStation 4 and Xbox One players were promised ported versions of The Stick of Truth, but at the time of this review, it is still delayed without word of when it will be made available. At the time of this review, BT Games is selling both the PlayStation 4 and Xbox One Hard-copy Versions for R899.00, which I can say is justifiable, as it had and has me hooked. I am a selective “completionist”, and as stated, not a true South Park fan, but I had the need to complete the game before writing my review and along the way, I had countless “blush”, “gasp”, “chuckle” and “roaring laughter” moments while playing, and would recommend the game to fans of the franchise and strong-willed newcomers alike, but obviously, South Park: The Fractured But Whole is strictly catering for and to the 18 year and older age group and will offend you at some point, it is inevitable. Pinch of salt tactics are your best friend.