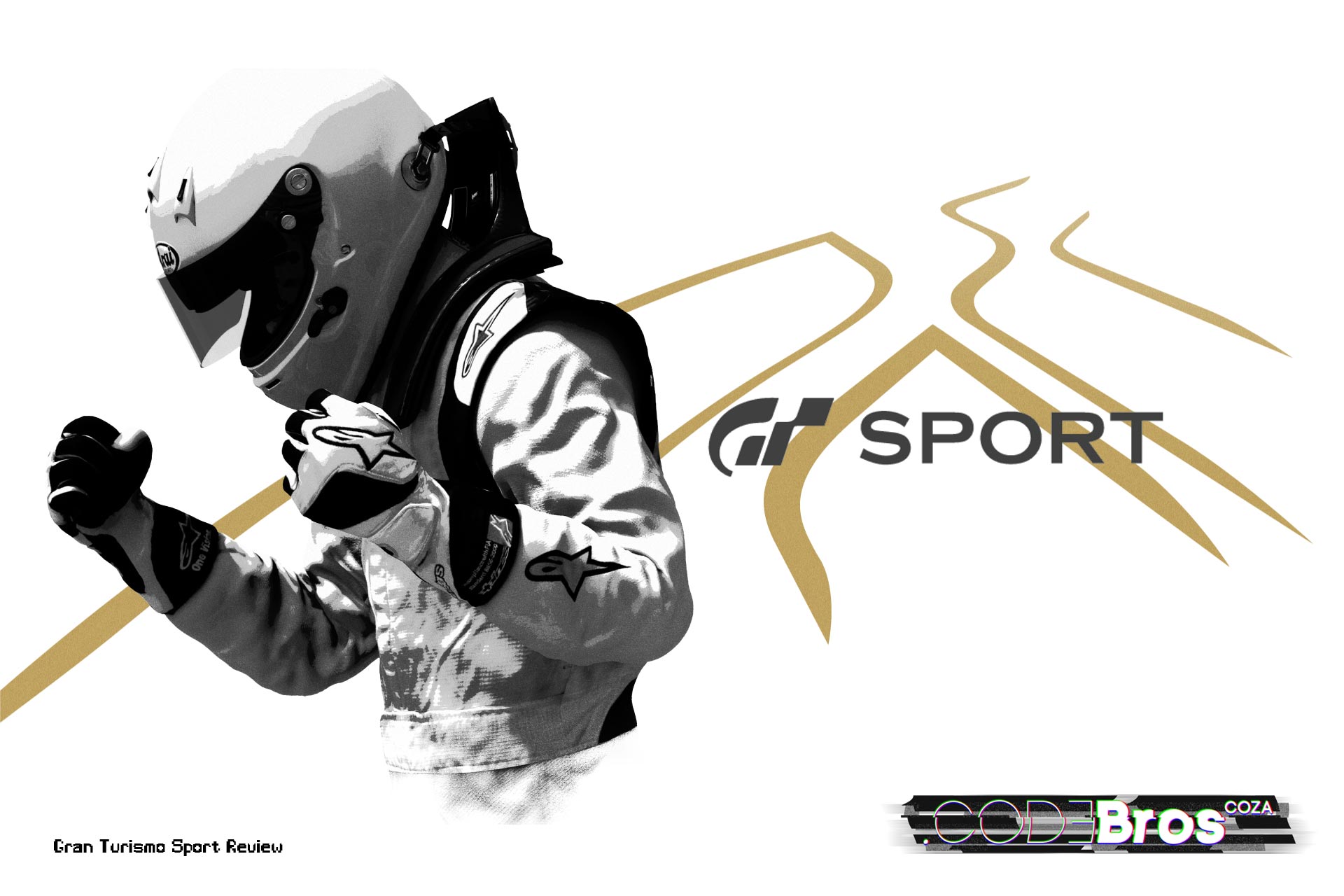 It is impossible to believe that Gran Turismo has kept motoring enthusiasts at the edge of their seats (literally) for 20 glorious years already. It feels like just the other day that I booted up the vanilla version of Gran Turismo Driving Simulator on my PlayStation 1. The nostalgic flashbacks have made Gran Turismo Sport (GT Sport) a superb ride, which, channeled through my father, brings you this review. The main question is: Has the Gran Turismo Franchise withstood the test of time? Let’s delve into the CodeBros experience together to see.

How does one measure the success of a franchise? I believe the answer lies within the amount of returning customers/fans, coupled with the conversion of new customers/fans and the ability to retain these customers/fans’ desire to keep coming back for more. I always thought I was the biggest Gran Turismo fan in my household, until I showed my dad the Announcement and Launch Trailers for Gran Turismo Sport. He recalled tracks, moments, cars and even songs from Gran Turismo Games past, which immediately told me, my dad is the true fan and the one that needs to do this review. Enter Andy du Plessis, an Automotive Industry Specialist. Not only has my dad passed his Audi Experience Advanced Driving Course with distinction, but he has sat in the passenger seat of a Rally Car, calling for the driver and even raced Formula V in South Africa, so when it comes to the inner workings impacting the outer workings of a vehicle, he honestly knows what he is talking about.

Benefits of VR according to Daddy Doop

My dad did not mess around, he smashed on the PSVR Headset and launched straight into the Gran Turismo Sport VR Tour Mode!(via Arcade Mode) This is one of many game modes that are native in this rendition of Gran Turismo, and seeing as this is the most revolutionary mode out of the bundled offering, it only made sense that it was the first mode we launched into. Suffice to say, we were all exceptionally disappointed to find out that this is the only part of GT Sport that is VR Compatible, with limited amount of racetracks to start off with and a short maximum of two laps per driving session. The disappointment faded fast though, because the more my dad was driving, the more tracks he began to unlock! In his first sitting he drove over 150km of track distance using the PSVR Headset, which proves that persistence really does pay off.

Not being familiar to console at all, my dad was pleased when the game launched and presented him with three Race Control styles: Left Stick (Joystick), D-Pad (Directional Buttons) or Controller Motion Sensor (PS4 Controller Tilting). I had to admire the lengths my dad went through to test out the game, he tried out all the control options but settled on the Motion Sensors, and has not changed since that decision was made.

[miptheme_quote author=”Andy du Plessis” style=”text-center”]Give me a Lexus LC500 on the Tokyo Expressway any day instead of a cliché Lambo![/miptheme_quote]

When asked whether he wanted to switch over to playing on the TV, he made it clear that playing inside the VR headset, even when not in the VR Tour Mode really helped keep him “in the zone” by drowning out all external influences, allowing him to learn the tracks faster via VR and focus purely on bettering lap times incrementally to take down opponents in the rest of the Arcade Mode features. You might be saying, “but I do not have a PSVR Headset, how does this benefit me?”. Easy. Get one! Write a letter to Santa. Drop hints to friends and family to contribute to one. There is an influx of VR Compatible or Fully VR Games on the way, you do not want to get left behind. The application in Gran Turismo Sport was proven to me, far beyond just the VR Mode. The prices have come down since launch, making it more accessible and viable right now. The time is right. *Hint Hint*

Arcade Mode offers you the Single Race, Time/Drift Trial, Split Screen (Local Multiplayer) and Custom Race features above and beyond the discussed VR Tour feature, which has honestly kept my dad busy for 80% of his [I’ve lost count already] hours of gameplay. This being despite the fact that there are massive reductions in tracks to race on and a significant “do away” with racing cars when compared to previous Gran Turismo games.

My dad and I both agreed that it was better to have one model of a race car that you can tune or tweak to the “n-th degree” rather than having 15 variations of a single model that you can not really customize. This lobbed off the heavy weight of the game, offering players a more raw, purer and straightforward experience. The core of racing, if you will, personifying Gran Turismo’s claim to fame, “The Real Driving Simulator”. We eventually established that the VR Tour climaxes at a point where you eventually gain access to the VR cockpit of over 140 vehicles, modeled exactly to their real life counterparts, 17 racing locations and 40 track layout variations.

The Career Mode and Sport Mode are where things get even more magnificent. Career Mode may be an odd title for the section, as it sees the return of the brilliant Driving School feature from Gran Turismo’s past, where you can learn the basics of driving, racing techniques and signature tricks that pro-racers learn, as an example, finding the ideal racing line and tightening your clipping points (cornering angles) to reduce lap times. You can then take your newly acquired skills and hone them on the Mission Challenge and Circuit Experience features.

The truth behind this “Mode” is to actually subliminally teach players good driving etiquette, which you then take with you to the Sport Mode and apply it to your Actual Potential Racing Career. Confused? Good! Stay right there. Make sure you are sitting down for this next part.

You read that right. The FIA (Fédération Internationale de l’Automobile) and Polyphony Digital partnered up in 2014, and took on a very ambitious vision, which has materialized in Gran Turismo Sport’ Sport Mode. Basically, the international game servers that host the Competitive Sport Mode Races, pitting you up against other real life players, monitors your Driving Abilities, your Techniques and your Etiquette. It then multches all the variables together through various ciphers and identifies whether you have potential as a real life race car driver!

In summary, if you play nicely, race well and put the time and effort into your online racing, you could get a call from the powers that be, offering you a Digital FIA Racing License that could materialize into the Real World! Special Racing Licenses are required by Sanctioning Bodies to participate in their Racing Series, and these Licenses cost a serious amount of dosh, which is a major setback for many Aspiring Racers, especially in coutries like South Africa where our economy is not on our side with constant Rate of Exchange fluctuations.

The global regions that this feature is available to have been split into three: Firstly Asia and Oceania, secondly Europe, Middle East and Africa and lastly North, Central and South America. Essentially, this is the cheapest way for you to become a legitimate racer! Note I said cheapest, not easiest. The FIA bit just blows my mind, and without that in place, the eSport application of Gran Turismo Sport is a reality too. Yes, we see many online, competitive racing games, but just take what I have described about the server monitoring your driving and apply that to eSport shortlisting, which makes it much easier for Sponsors (Locally and Abroad) to identify a set of players and group them up to make a World Class Digital Race Crew to participate in Racing Leagues! eSport will mutate instantly. It will happen. Mark my words.

Getting back to my dad and his review, we discussed the technical side of the game, and how making changes to your Suspension, Drivetrain, Braking and Aerodynamics actually made a real difference to your driving experience. As an example, by adjusting your Damping Ratio and Camber Angle by even 0.15 points either adversely effected your Stability or helped your vehicle Handle better, allowing you to shave a few seconds off of your lap times. According to my dad, this was particularly important, because he said, “The better I got at laps, the better the AI got, forcing me to find ways to get ahead and stay there”.

Lastly, we debated the Visual and Audio aspects of Gran Turismo Sport. GT Sport is already the most gorgeous racing game available to date on regular 1080 displays, but also pushes the boundaries by being 4K and HDR enhanced, taking the realism past the “Is this real or CGI” point and completely blurs your distinction or perception, making it exceptionally difficult to tell the difference between a 3D rendered cut-scene or actual video footage.

With that said, guess what, Photo/Landscape Mode (Scapes) is back! This mode lets you choose any of the meticulously recreated vehicles and place them in-front of over 1000 different backdrops, allowing you to position and take a photograph as if you were standing in person by the car with a DSLR Camera. If you then want to, you can even apply a filter before you export your image to use as a HD Wallpaper. Oh yes, before I forget, in the Decals Customization, you can upload a vector render of your own, like a logo, name or something that is personalized and apply it to your car! How wicked?

Not only does the game look great, play great but it also sounds great. The OST and sound effects have really been upgraded. Do not get me wrong, they were always good, but they are in a category of their own now, with realism bleeding over into the rumbles of those magnificent engines, corner-squealing tires and gravel tossing pulloff’s. Gran Turismo Sport made such an impact on my dad that he bought himself a PlayStation 4 System, just so he could play the game whenever he wanted, without depending on borrowing either my or my brother’s consoles, and he was even strongly considering buying a second PSVR Headset until I told him he could keep mine till I needed it again!

Developed by Polyphony Digital and Published by Sony Interactive Entertainment, Gran Turismo Sport launched on 18 October 2017, exclusive to the PlayStation 4 Console System. At the time of this review, Makro has the Standard and Day One Editions of Gran Turismo Sport on special for an exceptionally reasonable price of R899.00. The game sold a Console and nearly sold an additional PSVR Headset, so I honestly cannot argue with my dad’s logic and score rating, so it goes without saying, GT Sport is worth the money, the time and the effort, with benefits that go far beyond being “just a game”.