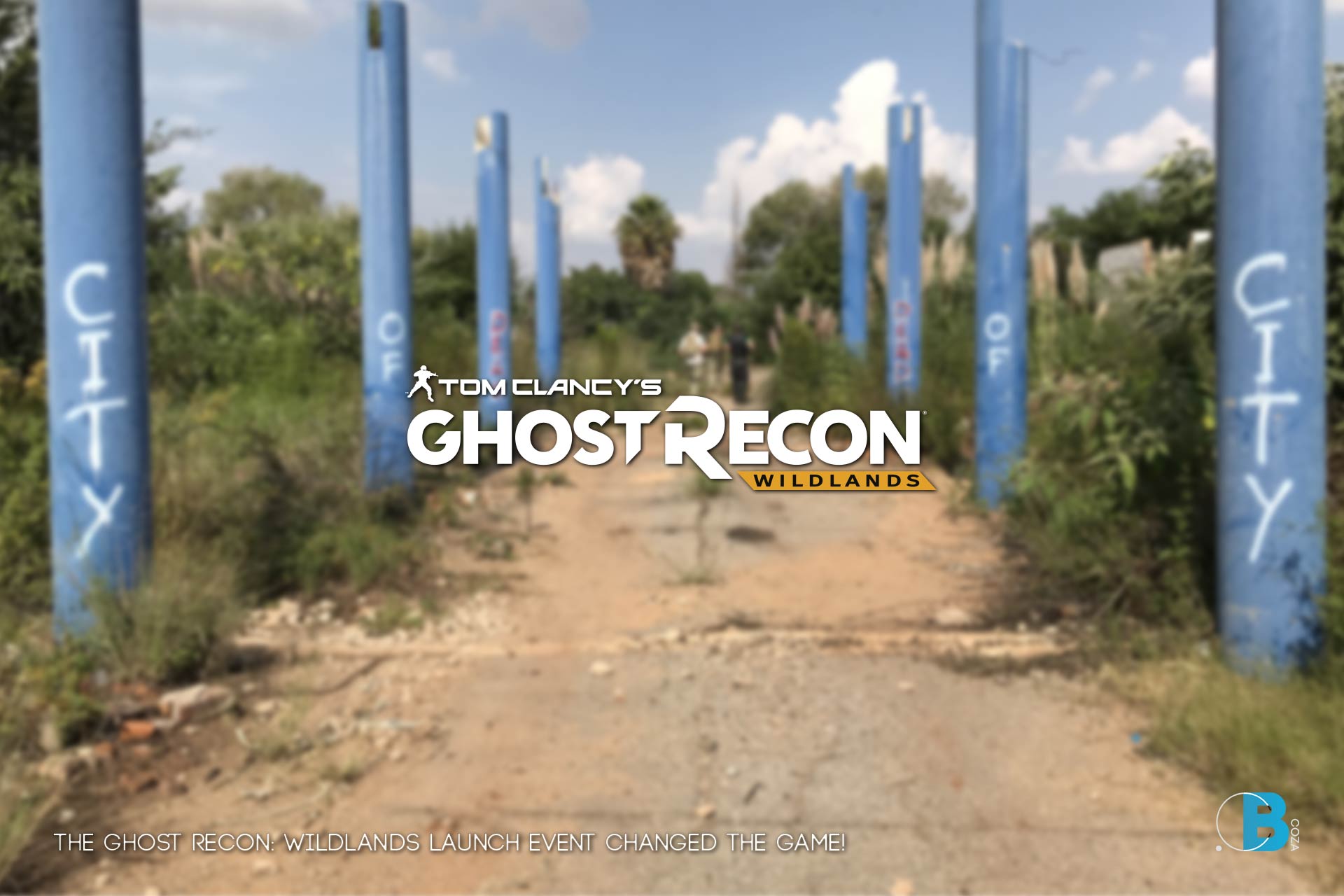 In Itacua, Bolivia, we weren’t just Soldiers, we were Ghosts, and we were on our own…

Saturday, 4 March 2017, 09H30, the Media gathered in Randfontein at the City of Dead for the Launch of Tom Clancy’s Ghost Recon: Wildlands. Our mission, to stop and eradicate the Santa Blanca Cartel. It does not get more real than this (for the public that is). Upon arrival, we were greeted by the team from Megarom Interactive and the hosts, Airsoft HQ, who together put together three intense scenarios from the highly anticipated video game. We were going to experience the non-digital version of Covert Operations and Intel Gathering.

At 10H00 we received our gear. We were armed with M4 Carbines, weighted to simulate the real deal. No vests or protective gear was supplied, because when you are undercover and tasked with infiltrating a village, it is best to blend in with the locals. It was however advised to purchase a face-mask if you wanted to leave with your pearly-whites in place!

By 10H15, we were introduced to the Pro’s, who then selected their Ghost Squad from the present Media representatives. CodeBros was given the honor of joining the Ex-Military Specialist whose call-sign is Cobalt, along with Marco Cocomello. A handful of Media were selected to be the Militia aiding the Santa Blanca Cartel within the City of Dead. The first Operation, was to gain access to the City of Dead through either commandeering a Cartel Vehicle (Military Buffel) or by sneaking in, using the buildings as cover. The order to Move Out was called and the Game Was On!

We opted to split our Ghost Squads into three cells, one cell would engage the Cartel Vehicle that was dumping bodies outside the City and would then drive the vehicle into the center of town and engage the Santa Blanca and the Militia Forces as a distraction while we took the City by foot. It was hot, intense and in true Ghost Style, we waited till the dust settled and the Militia were convinced that there were no more Ghosts on their way. CodeBros and Cobalt spearheaded the attack on a building tagged as The Garage, where a Chemist and Drug Mule were holding out with a large stash of Cocaine. The main objective was to find and eliminate Snake Eyes, and search his body for documents that would lead us to the heart of the Santa Blanca Operations in the area, which we then needed to exploit to bring about the End Game.

After an hour and a half in the field, sadly, the casualties were high, and we did not achieve our objective and lost the City to the Cartel. The second scenario was completely different, CodeBros was now part of the Militia and we were tasked with securing a mole within the Santa Blanca and extracting them using the Militia Vehicle, where we could interrogate and torture the mole. To our surprise, the “dummy” we thought was the mole, was a decoy, and the real mole was an actual individual from the Media, who stayed close until a certain point in the game, when they bolted and regrouped with the Ghosts and delivered a stack of documents detailing our positions. This is where it got real intense. We were surrounded, out manned and overrun. We lost the VIP and the Intel, and again, did not achieve our objective after another hour and a half in the blistering sun.

The third and last scenario, was the most fun. The Ghosts were coming in full force, to blow up our key locations, and while assaulting the Militia, they sent out skeleton teams to place two Satellite Up-link boxes at random points within the City of Dead which would call in an airstrike. These boxes had timers on, and once they were planted, the timers were activated. Once the timers each reached 30 minutes, that location would be called out as demolished.

Shots were being fired from all locations, the battle was intense and unrelenting. We managed to find and deactivate one of the Up-Link Boxes, all we had to do was defend it with what little time we had left. A large force approached us from the rear, and I decided to be a bit of a lone wolf and flanked the force from the rear, and proudly, I took out more than half the team before I myself got hit and started bleeding out (literally and figuratively). After about two hours, the game was over. (16H30) Nobody won, the Ghosts missed their Extraction, and the Militia had lost many buildings to C4 Explosive Charges.

CodeBros wishes to thank Megarom Interactive and the Airsoft HQ Teams for putting this event together and for seriously getting our Adrenalin pumping to the maximum! This event has changed the game completely for me. The same way that you can decide within Tom Clancy’s Ghost Recon: Wildlands to either go in guns blazing or take the stealthy “unseen” approach, was emphasized at this event, and after taking many bullets to the tender fleshy parts of my body, I will now be opting to be as stealthy as possible within the game. That being said, after this hugely successful Media Launch Event, I am seriously enjoying playing the game even more!

The basic rules of the game were as follows. After being hit with an Airsoft Pellet, you had to call out “Hit” and raise a “Dead Rag” in the air, to stop anyone from shooting at you again. You then had three minutes to be revived by a team member before bleeding out and needing to run back to your “Respawn Zone”. Being revived, was emulated by you being bandaged around your arm. You were only allowed to be revived twice before you were required to call out for a Medic. This Medic then had to “inject” you with a syringe containing a dice. Each number on the dice represented a different “final” revive task. As an example, one of them would require you to get revived and retreat thirty meters (30 steps) before you could begin fighting again. If you had a side arm, you were able to pull it once you were hit and defend your location and the team member busy reviving you. This was so much fun!

We have an Image Gallery Showcasing the Event: Click to View