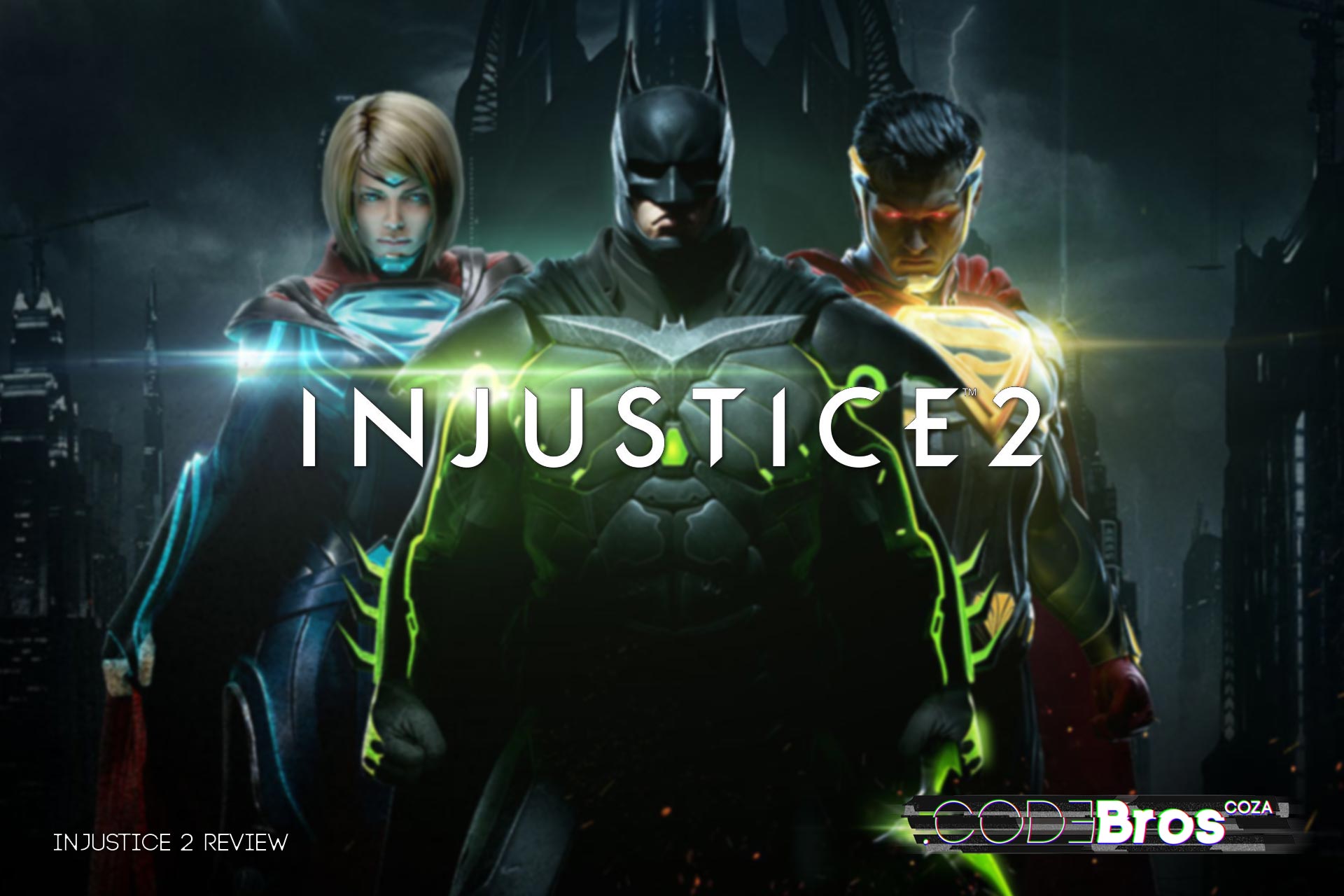 On 3 April 2013, the Original Injustice: Gods Among Us title threw us into a very dark DC Universe, where Superman ruled Supreme over all, or at least so he thought. After many battles and intense cinematics, Superman was stopped and had his Powers Drained, but deep down we all knew that this is not where things would end. Four years later, we see the Return, and Rebirth of the Injustice Universe with Injustice 2, with the key payoff being, “Every Battle Defines You”, we quickly learn what the depth of that statement means. I have been playing since the game launched, and I believe that I am able to give you some trustworthy insight on what makes this game tick.

Where Do We Begin?

Injustice 2‘s Story picks up where the Original Injustice left us.
Superman has been locked up and depleted of his powers, while Batman and his team make attempts at rebuilding civilization while keeping a watchful eye out in preparation for Earth’s next Threat. (You cannot tell me that you did not see this coming). After destroying Krypton long ago, Brainiac has set his sights on “the now” helpless Man of Steel. This threat forces the former Justice League to try and “forget” the past and temporarily stand united in the best interest of the Planet. Superman and Batman may be on the same side, but Personal Tension still lingers. Injustice: Gods Among Us had us playing through a few DC Dimensions, but now, we stay grounded in one Universe, which helps newcomers to the Franchise, because the First Chapter gets you up to speed really quickly, introducing you to both the history of the first game as well as what “really” happened to Krypton, setting the stage for Injustice 2. The Story in Injustice 2 is absolutely captivating, and I dare go as far as saying, it is the best DC Story I have experienced in a long time.

It Is Like Playing and Creating Your Own Movie

Something that was great from Injustice: Gods Among Us, was how the Story flowed though each Hero or Villain that you played via the Revolutionary Cinematic Campaign. If you had the Stamina, you could play the game from start to finish in a Single Sitting, and that is still the same in Injustice 2, if not slightly augmented to give you an even more submersive experience, because the additional modes rolled into the fold, benefit both Online Competitive Players as well as the Solo Non-Competitive Players.

The detail in the Cinematic Renders is breathtaking, so much so, that even without sound, you can see what is being said and feel the ambiance that would normally be created through the Audio. I was forced to play my first sitting with the sound down very low, not to wake my boys whom I had just put to bed, otherwise I would have had a very young audience, which is a problem, seeing as the game is Rated T (Teen) for it’s Language, Violence and Gore. The lack of proper volume did not leave me sitting wondering what I had just missed. I watched as Kara escaped the Brainiac Invasion of Krypton, saw the Terror on her face, felt her Sorrow as she watched her mother be assimilated by Drones and experienced that “awwwwww-moment” seeing baby Kal-El (Superman) zoom past in his Spaceship.

The Gear System allows you to Customize how each Hero or Villain looks with roughly 25 Unlockable Shaders that alter Costume Colours as well. The benefits are not only Aesthetic, as each piece of Gear that you swap out, also changes your Attributes, namely Strength, Ability, Defense, and Health.

Gear is earned through Mother Boxes which you Decode, each containing Several Pieces of Character-Specific Gear or Abilities in Boxes ranking from Bronze through to Diamond Grade. Mother Boxes are acquired by simply playing the game, and each Piece of Gear is Graded as either Common, Rare, Epic, or Legendary. Common and Rare Gear only provides boosts to a Character’s Four Attributes, while Epic and Legendary Gear enable additional Augments, which are extra Modifiers that provide Percentage Increases for landing specific Attacks. An Added Bonus in the mix is that each Fighter has Two Customizable Ability Slots, which allow you to either Modify or Replace Special Moves!

Each Fighter features their own Individual Progression, steering Players clear from those unfair Global Leveling Benefits. A Player’s Game Progression naturally increases their Fighters’ Statistics, impacting their Effectiveness in Solo and Online Competitive Game Modes. As a Fighter Levels Up, naturally their Four Attributes Level Up too. The Strength Attribute dictates power of Normal Attacks, while the Ability Attribute effects the Power of Special Attacks. The Defense Attribute controls how Resistant you are to Opponent Attacks and finally, the Health Attribute ultimately decides how much of a Beating you can take before loosing both your Health Bars in Battle.

Augmenting a Fighter benefits your Solo Campaign, but Augmentation really shines in the Online Competitive Mode where you Battle against Players from around the Globe with your Unique Heroes or Villains. Here it does not matter if both Players choose to Fight withWonder Woman, because your Fighter will have different Gear Equipped and perhaps have a few extra Shaders Applied too, either matching you equally or giving you the upper hand over lower level players, alternatively, the inverse can also be assumed.

These augments can make a Huge Impact on Online Game Balance though, which is ridiculously important to Competitive Players. Injustice 2 also allows Players to completely ignore Gear and Progression in Multiplayer, where Players can Opt Out of using Custom Character Upgrades before Starting a Match by both Voting or they can Vote to Match Character Levels instead. For Tournaments (See the Injustice 2: South African Cup Announced! Article) and Fighting Game Loyalists, there is also a “Competitive Mode” which Completely Suppresses All Changes to Fighters.

Now for the brilliant Multiverse Mode, which is essentially an Endless Single Player Challenge Mode! In the Multiverse, you can Choose from a Selection of Time Sensitive Mini-Campaigns, depicted by different versions of Earth which can stay Active for as long as an Hour or a few Days. Each “Earth” sports many Various Fights, which vary in Difficulty and often feature additional unique Challenge Mutating Parameters, with one such Example being a Gradually Draining Health Bar! Each “Earth” also has Specific Objectives that grant you Unique Rewards, so to put it bluntly, the Multiverse is the Fighting Game Equivalent of the Loot Gathering Raids experienced in MMO’s, where Completing Challenges earns you Mother Boxes filled with Epic (Expression) Random Gear.

It’s All About The Combo-Mambo

Leveling up your favorite Fighter could have ended up being a boring grind if the Traditional Recipe for Fighting Games was followed, but Injustice 2’s New Franchise Features and Gameplay Mechanics are monumentally different from Injustice: Gods Among Us, but not in an “In Your Face” kind of way. It humbly Showcases it’s Improvements by not Lagging between Battles (Campaign) and by allowing you to string together large continuous Combo’s(Online) a lot easier with what can only be assumed to be an Improved Input Recognition System. Like with any Fighting Game, Injustice 2 is all about Mastering Combos to deal massive Damage, but besides the Light, Medium, and Heavy Attack Buttons, no Fighter is a Direct Clone of another in terms of their Controls. Each Fighter is easy to quickly Pick Up, but when switching to a New Fighter you will notice distinct Pace differences that require you to remaster your Combo Timing.

Each Fighter has a Simple Three Button Combo Set complimented with Directional Combo Moves, which you will remember if you played Injustice: Gods Among Us. The familiar moves of the Original Fighters like The Flash, Superman and Batman have stuck with the Sequel, but have been improved upon, so applying what I said above, you will be able to string together their Combo’s easier with your Muscle Memory due to the refined Combo Recognition System. The Injustice Classics are also still there, like the Environmental “Interactions” that allow Fighters to Throw or Wall Run from Objects in the Background and initiate those Glorious and Brutal Stage Transitions. That pesky “Clash or Wager” System which lets you Risk a portion of your Super Meter to Regain Health is also still a Grounded Feature, which in all honesty is something I was Never Good At from the beginning.

Available through the Apple App Store for iPhone and the Play Store for Android devices, you can download the Injustice 2 Companion App. This App allows you to play Independently from the Console Version, so if you do not have the game yet, do not worry, you can enjoy the game along with the rest of us. However, if you do have the game on console, there are Rewards for Linking the two together, but these rewards are mainly for the Console Version, encouraging you to buy a copy. You can even Earn Extra Gear for your Console Fighters through using the Companion App. Campaign Mode is separated from the Console Version, however, the Injustice 2 Cinematic Story can be played through the App Story Mode.

You start off with One Hero in your Roster, but you are able to Unlock all the Injustice 2 Heroes or Villains in quite a few ways. There is an Arena Mode where you would Battle Daily to gain a spot on the Leaderboard and earn Power Gems and Credits which get used in the Store to Purchase Hero Shards. Enough Hero Shards will Unlock a New Playable Fighter, as an Example, to Unlock Armored Superman, you need a total of 360 Shards. Some Shards are only attainable through Achievements, Hero Packs, Heroic Modes and trough Purchase via the Store. Operations Mode lets you send your Heroes on Missions while you are not playing, which earns you Credits over time. The App also offers a Resource Mission Mode, Challenge Mode and soon to be added, a League Mode! Daily Login Rewards also encourage you to keep your World Revolving around everything Injustice 2 related.

Developed by NetherRealm Studios and Published by Warner Brothers Interactive, Injustice 2 was released on 19 May 2017 here in South Africa and has already gained traction. At launch, BT Games was selling the PlayStation 4 Version and the Xbox One Version for R825.00. I was able to finish Injustice 2 with both endings in the Story Mode, but it took me a lot longer than most. The Multiverse is seemingly endless, with new challenges to face all the time, also if you take Online Multiplayer Battles seriously, Injustice 2 will always present you with new opponents for as long as you want to keep playing. Basically, the longevity of this game is pretty secure. Fans of DC Comics or Fighting Games need to Purchase a copy of Injustice 2, you will not regret it! Injustice 2 is Justifiably in a League of it’s own. (See what I did there?)