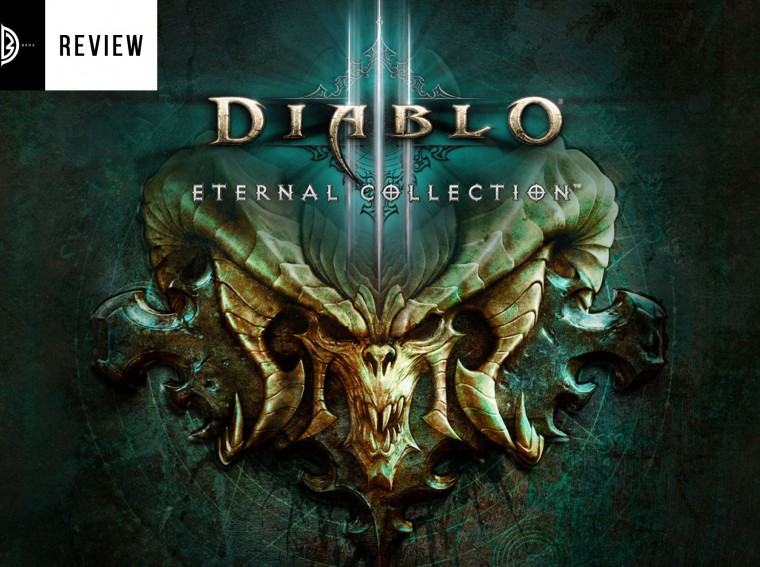 The high heavens are under siege once again! Grab your Nintendo Switch and stand against Diablo, or there will be hell to pay!

Yes, pretty much every review so far has a pun about “hell” somewhere in the hook-line, so sue me for riding the “punwave”, it just feels right. Elephant in the room aside, let’s get into why you are here. The Nintendo Switch is just about to get one of it’s biggest third party supported titles, Blizzard Entertainment are launching and have worked really hard to bring us Diablo III: Eternal Collection, as an incredible adaption perfectly fit for a portable gaming system. The term is pretty much worn out by now, but saying that a game works well on the Nintendo Switch still applies here, even more than most, mainly because I feel Diablo is a game that fits the mould of a game that is best played in short bursts, and having it portable on the Nintendo Switch gives you that experience with a slice of perfection as garnish.

My first taste of Diablo III was during the PC Beta quite some time ago. I had never played any of the other Diablo titles before, but the combination of skill bashing, gear grinding and character building did peak my interest, however that is where it ended. I fondly remember there were moments where you’re pretty much just “facerolling” every button while waiting for your cooldowns to reset, but alternatively also had moments where figuring out the best combination of abilities, modifiers and gear meant the difference between victory or shameful death. My experience with Diablo III on PC was great, but I could foresee the style of gameplay fitting console a lot better. I recently watched one of my friends play the PlayStation 4 version, and I was pleasantly surprised at how natural the button layout worked with all his character abilities, and the console style of swapping around weapons etc.

Diablo On The Run

I enjoyed doing my review playthrough next to a poolside, on a golf course, sitting next to a braai fire and even laying on my bed. From the past pattern, Diablo is a game that was originally designed to be played sitting behind a computer screen, so it is ridiculously refreshing feeling unchained from the typical gaming chair or couch play fundamentals, but yes, I did play Diablo III while using the Nintendo Switch Docked Mode too.

I am sure that one of the first questions that would have popped into your mind when I mentioned Docked Mode is, “How does it perform?” or “What’s the Point?”. Well, having played a really large portion of Diablo III in Handheld Mode, and then switching to Docked Mode to carry on playing while the Nintendo Switch was charging, I can confidently say that the game runs as smooth as silk, without seeing any performance or framerate drops, v-sync horrors, or freezing issues a few other title ports managed to mess up royally. Loading times are non-existent whether you are connected to the Diablo Servers or not, specifically for the season perks or rankings.

One of the perks of a handheld console, is the ability to being able to play multiplayer over a local wireless connection. That is no different in any way with Diablo III on the Nintendo Switch, however each player will need their own copy of the game, so you can get excited about Diablo Co-Op on the Switch.

What Makes It So Desirable?

If you are reading this and have never played Diablo before, but have gotten a little intrigued, let me give you a very quick synopsis on the basics of the game. Diablo is an isometric “hack and slash” style game, where you choose from one of seven character classes to join a raging war between heaven and hell, angels and demons. You upgrade your gear and weapons by either having them crafted by your personal Artisans (vendors) or by delving into dungeons and facing off against waves of monsters ranging in difficulty, with the hardest elites glowing in that well known “legendary” orange to reveal a chest filled with gold and new shiny gear.

With seven classes to choose from, each with very different styles of play between, and within, them, my personal favourite is the Demon Hunter, focusing my skills around crowd control by having slowing arrows fall from the sky in a large radius, while dropping a slowing bomb on the ground to basically render all enemies motionless, letting me pick them off one by one with ease. Another fun class I played was the Crusader, with a build for plenty of flying, orbiting hammers that shoot lightning, and the last class I briefly sampled was the Necromancer. It was hilarious fun exploding the corpses of my enemies to do damage to more enemies, making even more corpses to explode, the perfect chain reaction of chaotic death!

As for the story, in the beginning you join up with the two main protagonists of the game, Leah and Deckard Cain, to uncover what fell from the skies into the old Tristram Cathedral that seems to be the catalyst for the dead and demonic creatures coming to life and attacking the main town of Tristram. Saying more than this will spoil things (for new players), but I can say that the story is gripping, the cinematics are glorious and the voice acting presents a strong narrative giving you a sense of direction within all the random chaos.

The game consists of 5 acts, 4 from the original release, and 1 more from the Reaper of Souls expansion that comes with the Eternal Collection, so the game is big, offering a lot, both pre and post completion! Leveling up your character brings more abilities and unlocks modifiers for those abilities. Even though you’re really just pressing some buttons around enemies, it creates a false sense of “power” within you as the player, and that feeling of power is quite addictive. Especially when you’re constantly collecting gear, with a new way to quickly view and equip upgraded gear with a dedicated button on console.

What Do I Get?

Playing Diablo III wherever you want is not the only benefit of getting it on the Nintendo Switch console, as it also supports amiibo, being able to summon strong monsters to fight for gear, with a daily cooldown! Then, the final cherry is the Ganondorf transmogrification set of armour. Just incase you do not know what is meant by “transmog”, it pretty much means you get to apply a skin to existing gear, to make it look like other gear, so in this case, once you have found your perfect build, and maxed out your upgrades, you can then apply the Ganondorf armor set and look like the Demon King Ganondorf himself! Diablo III: Eternal Collection also comes bundled with the Diablo III: Reaper of Souls expansion as well as the latest Diablo III: Rise of the Necromancer DLC.

Both developed and published by Blizzard Entertainment, Diablo III: Eternal Collection for the Nintendo Switch gaming console launches on Friday, 2 November 2018. For old fans of the franchise, who own a Nintendo Switch, this is a no brainer, it is a must have. For new fans, who own a Nintendo Switch, this is a must have… infact, I have a friend who is buying a Nintendo Switch only for the sweet reason of being able to enjoy Diablo III wherever he is. Locally priced, at the time of this review, you can pre-order your game chip from BT Games at R825.00 or a downloadable version directly from the Nintendo eShop. What are you waiting for? It is time to go raise some hell!

A massive thank you to Blizzard Entertainment for supplying our early review copy.