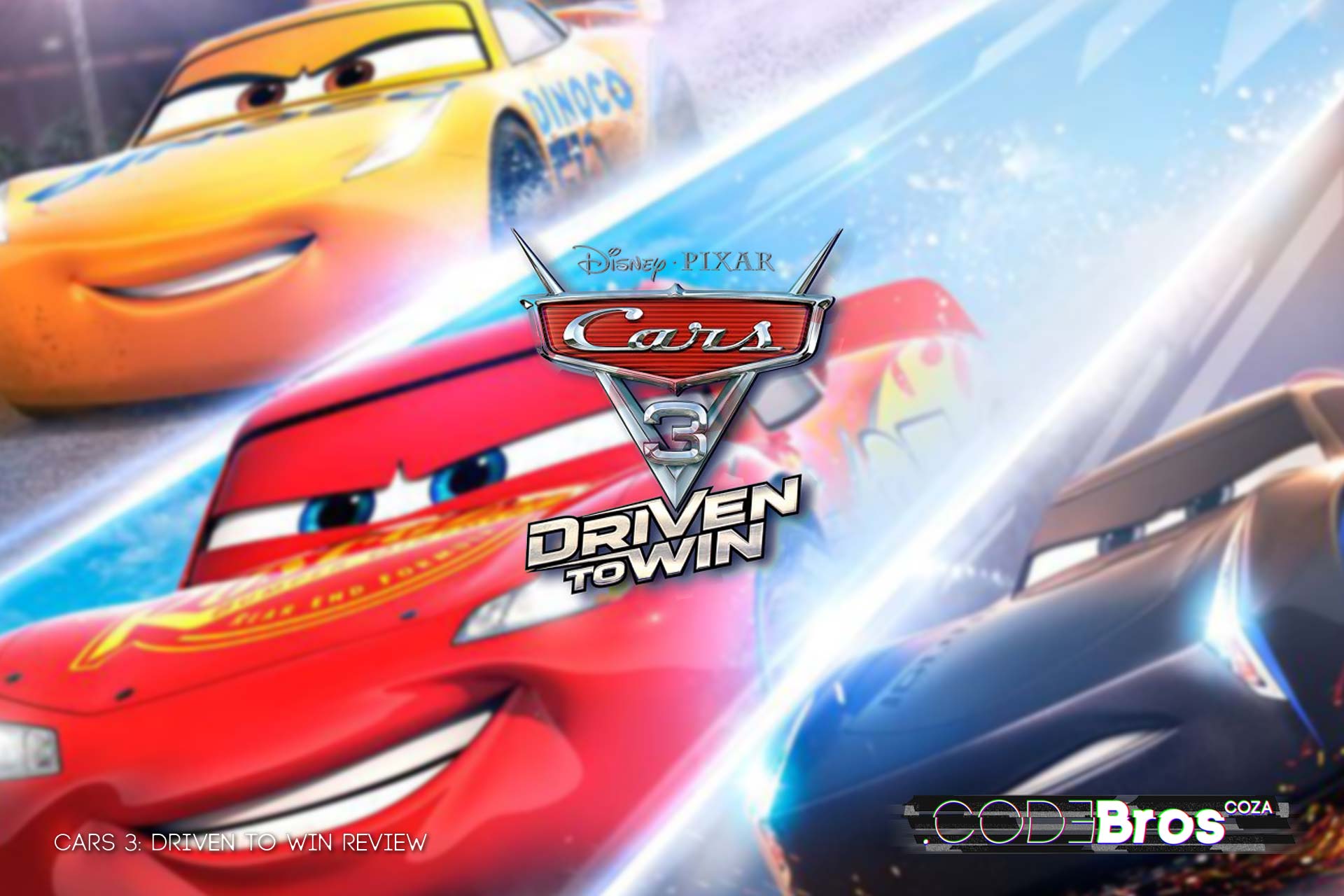 Whether you like to admit it or not, you have either said the words “Ka-Chow!” or you know the sentence, “…because Thunder always comes after Lightning! Ka-Chow!”. Yeah you have, or do… *wink*

Game developers Avalanche Software did not waste any time after their last release got “canned” (Disney Infinity), and boldly stuck close to what they do best, which is making games that are adaptations of their Disney & Pixar Motion Picture counterparts. Shortly after the release of the latest Cars 3 movie, Driven to Win hit shelves nationwide at retailers like Makro and other popular “non-gamer” stores where the Cars 3 bunting was flying high. The target market is so diverse with this Franchise, it only makes sense to get the game in everyone’s shopping basket. Let’s face it, who wouldn’t want to be Lightning McQueen or toss Mater’s Tow-Hook at someone and drag them around Radiator Springs like in the first Cars movie? Heck, I am guilty of wanting to take the Rusteze poster boy for a spin myself, and I did… but not as much as my children.

To The Point For The Parents

There is really not a lot of complexity involved in Cars 3: Driven to Win, and that is probably what makes it such a great little racing game (loosely defined) that will quickly satisfy the Cars Franchise Fan(s) in your household, it did in mine! From the minute that the game disc entered my house, I already had to contend with the sibling rivalry of “who is going to be Lightning”, but thankfully, due to the 23 Characters you can choose from, both my boys could be their own customized version of Lightning McQueen after messing around in the “Pimp My Ride”-like customizing tool.

I was very nervous when the game started, because I had both boys sat on the couch, each holding a PlayStation Controller, waiting patiently, but only one Avatar was active during the intro, but the heavens heard my prayer and the Local Multiplayer feature became available and both boys could get to racing… well, more like chasing and launching weapon volleys at each other, followed by maniacal laughter. Yes, very odd for me to begin the review discussing the Multiplayer feature, but I am quite sure most parents with more than one Cars Fan in the household want to know the answer to one Question: Can my children play this game together? Yes. (In my household, this is what determines whether I buy a game or not.) So, you are welcome moms and dads!

There is no Online Multiplayer feature (yet?), which is a shame, as Cars 3: Driven to Win could be even more potent if you could challenge other players not sitting next to you. You might be saying, “It’s a game for kids, why do they need Online features?”, and that is where you would be wrong (to a point), because this game is tough, let me just get that out there. By default, each time you take to a track in one of 5 Race Modes, the game is set to “Medium Difficulty”, which you can choose to change up or down to “Hard” or “Easy” respectively, but Medium gave me nightmares while trying to place in the Top 3 by the end of a “Race”. My seven year old son managed to play well at this difficulty, but I needed to switch down to “Easy” for my four year old son to stand a chance.

What’s Under The Hood?

In Cars 3: Driven to Win you are able to choose from 5 Different Challenge Modes, being Race, Battle Race, Takedown, Stunt Showcase and Best Lap. Then there is one last mode, which is purely for fun, called Playground, essentially being a “Sandbox Mode” where you can go and do whatever it is you want. Race is your traditional chase to cross the Finish Line first, as where Battle Race is the same, but just with the addition of Weapons. Takedown is both my eldest son and my favorite, because now you forget about the finish line, you have a countdown timer in which to wreak havoc to as many competitors as you can, with the highest scoring wrecker being crowned as the winner. Lastly, in Stunt Showcase you need to string together your best moves and tricks to impress a crowd and Best Lap challenges you to get the best lap time around a specific track.

The Single Player “Campaign” does not present you with a Story Mode, but is goal oriented, where you need to earn your standing in the Hall of Fame. You do this by competing in events around the globe, facing off against “Boss” races and learning a variety of tricks, like Drifting, Driving on Two Wheels or even Backwards Driving (nobody can beat Mater!). All these traits are displayed on a “roster” of sorts, which is your Single Player “Main Menu”, where you can keep track of your Fame Status via a big glowing Progress Bar at the top of your screen.

Naturally, each event requirement becomes more and more challenging, and I needed to start assisting my eldest son, because the voice prompts were not always informative or explaining things clearly. This again proves that the game does not have a specific niche target market, because if it was just for children, things would be excessively easy and daftly simple to understand. (Strong words, but it helps me get the point across).

The Graphics are appealing, and for obvious reasons, cannot be too intense, because with the amount of particle explosions and bullet trails, any more dense details would make the game intermittently slow, even on the “Next Gen” Consoles, so it should be appreciated for it’s application as a Cartoon Cart-Racer. The Soundtrack and Effects are also very satisfactory, and tie in with the atmosphere and OST from the new Cars 3 Movie. The post race commentary is a pretty cool feature that often had me chuckling away.

Cars 3: Driven to Win was Published by Warner Brothers Interactive and was initially released on 13 June 2017 for The Nintendo Switch, PlayStation 3, PlayStation 4, Wii U, Xbox 360, and Xbox One Consoles, seeing one of the largest platform releases in recent times. As mentioned in the intro, Cars 3: Driven to Win can be found at pretty much any Popular Retail Outlet and at the time of this review, Makro has the PlayStation 4 version and the Xbox One version on Promotion for R599.00 each. At this price, and even at the regular price, Cars 3: Driven to Win is a great addition to your game library, is geared for fans of the Cars Universe and will have a very long replay lifespan as long as you remain “Young at Heart” or have Cars fans in your home.