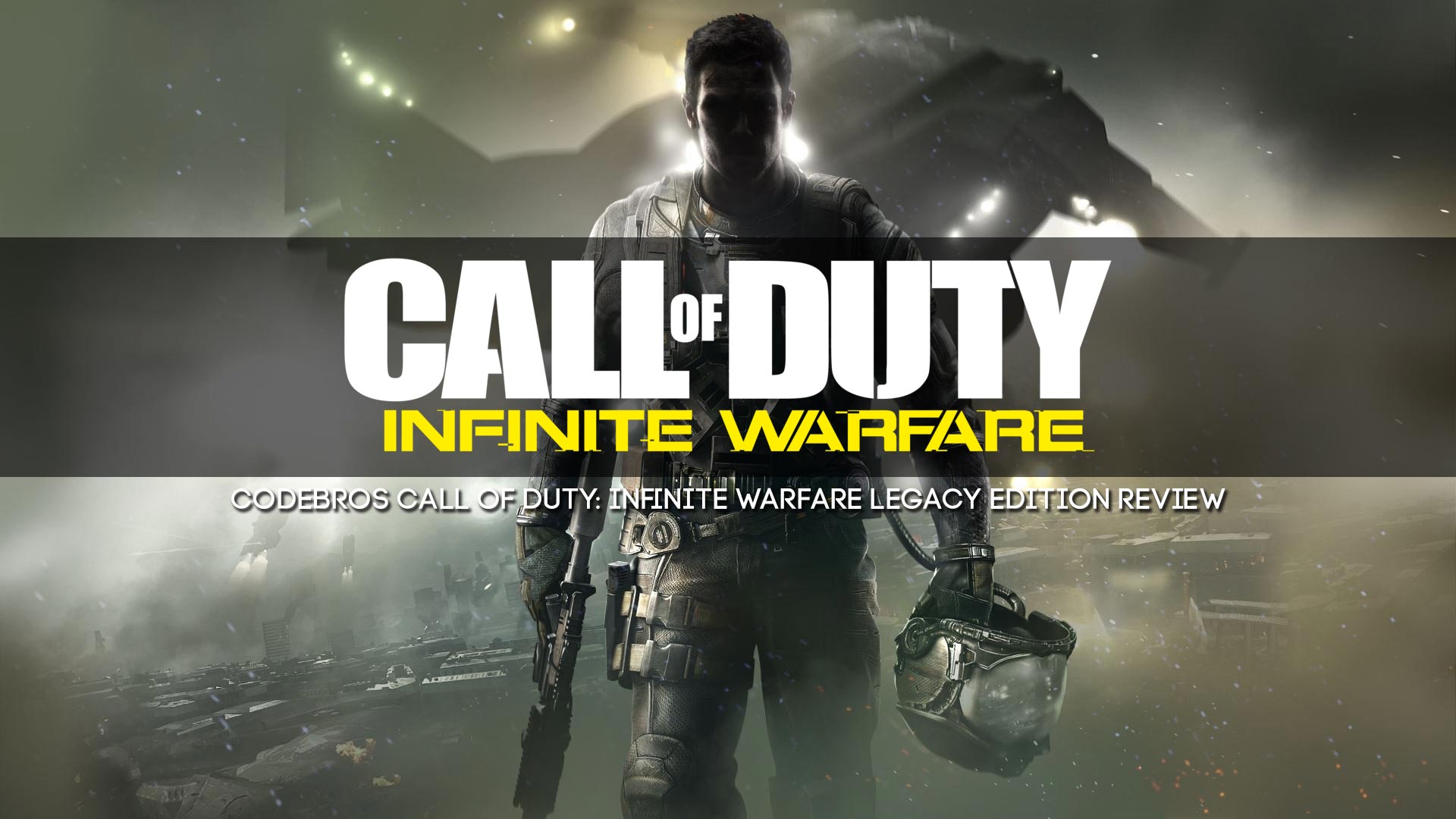 The sun, the moon and the stars would have disappeared long ago… had they happened to be within the reach of predatory human hands.” – Havelock Ellis

Earth has given all she can. “Man” had to look to the stars to meet the supply and demand requirements of ensuring the human race’ survival. Does this sound familiar? Don’t roll your eyes at me! Yes, the Campaign is set in a potential future where this could very well happen, and there has been a negative stigma attached to the “laser weapons” that the game introduces to the franchise, but honestly, it has gotten so easy to judge a book by its cover, or rather, in this instance, a game. Please afford me a few minutes to break the stigma, wrap up the concept and hopefully convince you to go out and buy Call of Duty: Infinite Warfare.

Set in the future, mankind has been split into two “factions”. The UNSA and the SDF (Settlement Defense Front). Call of Duty: Infinite Warfare starts off with you literally diving head first into battle onto a frozen moon from a drop ship. You are tasked with securing an experimental laser that the SDF are set on using against the UNSA. Enter the main antagonist, Admiral Salen Kotch, as he wipes out your squad and takes the laser for the SDF.

You then find yourself on earth, now as Lieutenant Nick Reyes, being debriefed by Admiral Raines about what just happened on the frozen moon. After a heated debate, you are dismissed and join Lieutenant Nora Salter while making your way through the Fleet Day Parade Celebration to showcase a declassified UNSA Project titled “E3N” to the public.

All hell breaks loose as an SDF sleeper agent takes control of the Planetary Defense System and turns all the cannons on the gathered UNSA defense fleet, laying waste to the skies. E3N (Ethan) turns out to be a UNSA Tactical Robot, who joins you in helping to retake the Planetary Defense System. You then hop into a Jackal (Air/Space Vehicle) with Ethan and take the newly declared war to the SDF fleet orbiting over Earth for an intense space-dogfight. The pearl of the UNSA fleet, The Retribution Space Carrier, is heavily damaged when it is used as a battering ram as a last resort against the SDF Command Ship, killing both the Captain and ExO. Once boarded, as the highest ranking officer onboard, you get promoted to the rank of Captain.

This is where the Campaign Mode really starts, as it opens up the rest of the features. You now have a “Most Wanted Target” list in your Captain’s Quarters that shows you all the key individuals that you need to eliminate. You also have a “Captain’s Log” which records important mission data and personal info about the characters you interact with.

Before each mission you choose a Weapon “Loadout” to start the mission with, as well as equip “perks” and enhancements, alternatively, you can use the recommended payload loadout. After you acquire SDF map intel, you can decide which planet (Primary or Side Mission) to take on from The Retribution’s bridge. Each mission earns you rewards and upgrades, which, after each mission get applied to The Retribution. This gradual repair and optimization is clearly for the epic grand-finale space battle. Things get heavily intense, however, that, I will encourage you to experience for yourself.

Okay, so now that we have discussed the game, let me mention what made Call of Duty: Infinite Warfare even more special to me. It was the insane cast that were behind the voices of each character! In order of notable appearance:

What blew me away even more, was the fact that each of these characters, had their faces textured and created to reflect their actual (real life) faces! It was exceptionally difficult not to scream “You know nothing!” at my screen in the beginning of the game when Admiral Kotch came walking through the snow. Lmao!

Multiplayer has a “sort-of” story to it, where you are taken in by a Mission Team of Mercenaries called the JTF Wolverines. To get your customization started, you pick your “Combat Rig” (Main Class/Loadout Preset). At Rank 1 you can only pick from 1 of 3 unlocked specs, there are 6 in total with their own specialized weapons and skill sets. I selected the Warfighter, an “all-rounder” Soldier. Whether you win or lose a match your Mission Team and you receive some points, which increases your Mission Team Rank. Once you reach Rank 15, you are able to defect to a different Mission Team, The Orion Initiative. At Rank 30, Sabre Team Seven and lastly at Rank 45, The Wraith.

Each action, assist or kill will award you with reward points, which then gain you a “key” after earning enough points. These keys get used in the Barracks to unlock crates filed with goodies like weapons, skins etc. There are a bunch of awesome Solo and Team Based Modes, as well as magnificent maps, including the old faithful, Terminal! Servers currently do not seem to be extremely densely populated in South Africa. You get daily login rewards as well, in the form of currency which you can spend on Upgrades and Skins for your Weapons etc.

The backstory to our four Zombie Mode heroes is simple. They are actors who arrive at an “abandoned” cinema to audition for roles in a new film, directed by a legend of cinematography, who is known for his delicately detailed and gruesome horror/thriller movies. After performing a blood ritual, our heroes are sucked “into” a 1980’s movie called “Zombies in Spaceland” where they are encouraged to stay alive as long as possible to make for a great movie filled with gore and adrenaline.

The four heroes are randomly rotated each time you restart a round, and reminded me of a team of familiar meddlesome young detectives, minus a talking pooch. The aim is to run around a theme park, and restore power to the place, which will enable you to escape (theoretically). The park DJ (David Hasselhoff) keeps the 80’s tunes pumping and randomly announces hints to try subliminally assist you. There are many elements to this mode, you earn tickets which you trade for certain items. Zombies often drop souvenir coins which earn you a crafted item or upgrade through a vending machine. You have Fate and Fortune Cards which act as temporary buffs, which you can activate after filing your Fortune Meter by killing Zombies or spending your Cash.

The ability to play this mode solo or co-operative is available, and similar to the previous Multiplayer Mode, you earn XP which increases your rank, and each completed round awards reward points earning a key which gets used to unlock Zombie Crates, which contains Weapons, Upgrades and additional Fate and Fortune Cards.

The Standard Edition for PlayStation 4 and X-Box One is available for R1,065.00 at BT Games. The Legacy Edition for PC via Steam is available for R1,299.00. So back to the futuristic stigma I mentioned. The concept is not exceptionally original, but has a very captivating charm to it. I was fortunate enough to review this title on an Acer Predator 17 Gaming Laptop, which ran everything at Ultra Settings, so the textures were gob-smacking and the particle effects were crisp! The soundtrack and voice talents really helped bring Call of Duty: Infinite Warfare to life, making this a seriously unique, yet nostalgic game, especially if you can remember playing Wing Commander. If you are too young to remember Wing Commander, then take my word for it, this game is good, really really good. You would be proud to have it as part of your collection.